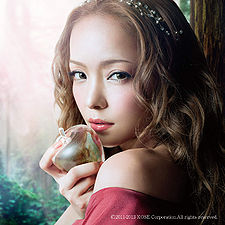 "Neonlight Lipstick" is the third digital single recorded by Amuro Namie. It was released along side her fourth digital single "Ballerina". The track was used as a commercial song for KOSE's ESPRIQUE. It was later included along with "Ballerina" as B-sides to her 39th single "TSUKI" in 2014. "Neonlight Lipstick" reached #16 on Billboard Japan's weekly Japan Hot 100 chart.