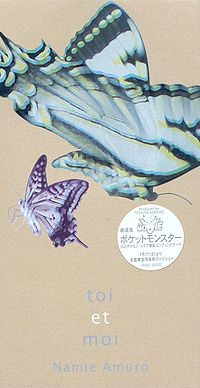 "toi et moi" is the 12th single released by Amuro Namie. It was used as the ending theme song for the anime film Pokémon: The Movie 2000. It is the first single by Amuro to not be included on a studio or compilation album. It is rumored that Amuro did not like the song and did not want to release it as a single. It was produced by Komuro Tetsuya and co-written by his globe band mate MARC, who previous worked on the "Dreaming I was dreaming" and "How to be a Girl" singles as well the main lyricist on Concentration 20. It was released only in a 8cm CD format.