"FUNKY TOWN" is the 31st single released by Amuro Namie. It was released in two editions: CD+DVD and CD only. The first press editions of the single came with disco ball keychains; CD&DVD edition came with a gold disco ball and the CD came with a silver disco ball. The song was used as the Lipton' Limone commercial song in which Amuro herself appears in. This is the lead-in single to her seventh studio record PLAY. "FUNKY TOWN" was produced by T.Kura and MICHICO for GIANT SWING PRODUCTIONS and "DARLING" was produced by Coldfeet.

The single was certified Gold for over 100,000 shipments by the Recording Industry Association of Japan.[1] The song ranked at #44 on Recochoku's download chart and the music video was ranked #4 on the video download chart.[2] In 2011, the ringtone version of the song received a double platinum certification; being downloaded over 500,000 times.[3]

The music video for "FUNKY TOWN" was directed by Uchino Masaki. It features Amuro dancing in front of a set of cars and a projected image of her face, with cuts of her sitting among gold disco balls. 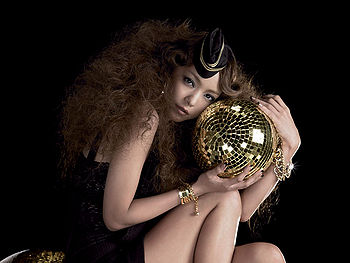 The single reached #3 on the weekly Oricon chart, and continued to rank for a total of seven weeks.