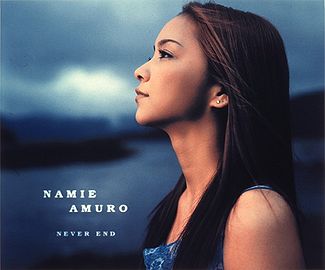 "NEVER END" is the 15th single released by Amuro Namie. It was used as the theme song for the 26th G8 Summit that took place in Okinawa on July 2000. It came about after the former prime minster Obuchi Keizo urged Komuro Tetsuya by saying "I want you to write a song that will be loved by many people, a song that gives us a vision of harmony and interaction in the world in the 21st century".[1] Komuro agreed and visited Okinawa many times to get a feel of the culture while writing the song. The song was later performed as the closing song at Music Fest of Ryukyu 2001, alongside other well-known Okinawian artists.

The single reached #2 on the weekly Oricon charts and charted for 14 weeks, making it Amuro's most sucessful urban-style single. It sold 640,310 copies, becoming the #32 single of 2000. A portion of the single's sale went to the Japan Committee for UNICEF.[1]