Wishing on the Same Star 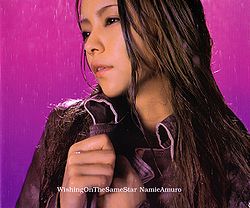 "Wishing On The Same Star" is Amuro Namie's 20th single. The title song is a cover of Keedy's song of the same title, written by Diane Warren. It was used as the theme song for the Toei movie Inochi. This single reached #2 on the weekly Oricon charts, charted for 11 weeks and sold 97,253 copies.