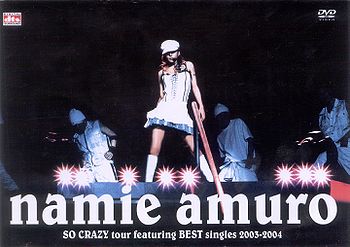 namie amuro SO CRAZY tour featuring BEST singles 2003-3004 is the eighth video released by Amuro Namie, and her fifth concert video. The tour started from November 2003 and lasted until May 2004.

The concert video was part of Amuro's "namie amuro SO CRAZY tour featuring BEST singles 2003-2004" tour, which was her first international tour. In addition to 34 dates in Japan, she made her first-ever solo tour dates in Taiwan (first and only time in New Taipei City), which became a regular stop for her international tours, and South Korea, her only visit to the country. The international concerts were broadcast in their respective countries on national television, in which Amuro closed out her concerts with NEVER END partially sung in their local languages; the Taipei concerts were promoted as "SO CRAZY in Taipei" and the Seoul concerts were promoted as "AMURO NAMIE So Crazy Tour in Seoul 2004".