"Contrail" is the second digital single released by Amuro Namie. It was used as the theme song to the TBS drama Soratobu Kouhou Shitsu. The song was produced by longtime collaborator Nao'ymt, and was his final collaboration with Amuro. It is an electropop song in the vain of "Dr.", and Nao'ymt wrote the lyrics about self-empowerment and themes of confidence and hope. "Contrail" was quite successful, reaching #8 on Billboard Japan's Hot 100 and #7 on the Japan Radio Songs Chart. It also ranked as the #65 best selling song of 2013 according to Billboard Japan. The song is certified Platinum by the Recording Industry Association of Japan for selling over 250,000 full downloads. 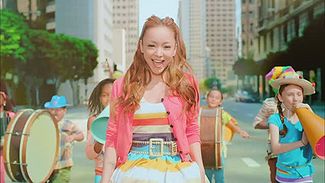 Amuro Namie in a scene from the music video

The music video for "Contrail" was directed by Nino. The video was shot in downtown Los Angeles, California at Pershing Square. It features Amuro walking through the city along with children.

There are currently two versions of "Contrail" to be found in Amuro Namie's discography. The following versions are listed in order of release:

Contrail
Included on FEEL as track #11 and as track #4 on Disc 3 of Finally. The latter version features a new mix and re-recorded vocals.
Contrail (Ballada Ver.)
Found on her fifth best-of album and her first ballad collection Ballada as track #16. This is a ballad version of the original song.