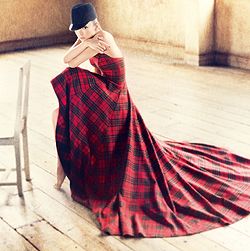 "Ballada" is the eighth vinyl single released by Amuro Namie, and her first vinyl release since 2001's "say the word". It was cut from her fifth compilation, the ballad collection Ballada. The record first went on sale at the venue of the national arena tour namie amuro LIVE STYLE 2014. This edition comes with the Music Card containing the full album and a Vinyl record containing two tracks.