You and I (Park Bom) 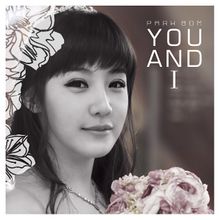 Artist
Park Bom
Digital Single
You And I
Released
2009.10.28
Tracklist

"You And I" is the solo debut digital single released by Park Bom. It is one of the three solo digital singles released by 2NE1 due to YG Entertainment’s plan to have each member unveil their individual talents. The song and MV was released digitally on October 28, 2009, it was composed and produced by Teddy, and was described as a Hip hop track. The music video was filmed in many locations throughout Seoul and featured Park and her love interest in a tragic love story.

The single reached the #1 position on Bugs, #3 on Dosirak and Mnet, and #6 on the melOn online music charts soon after its release, and a making of version was released on November 3, 2009. Due to the songs success, YG Entertainment decided Park Bom would promote the single. The debut performance was on Inkigayo on November 9, 2009 and Park reportedly cried afterward due to her disappointment in her performance. Park stated “I think I was 10 times as nervous as 2NE1’s debut performance. Because of this performance, I once again felt how big an impact not having the rest of the 2NE1 members are. I will practice harder and deliver a better performance on my next live stage.” Park performed again at Inkigayo on November 16, 2009 and the song won Cyworld’s December 2009 “Song of the Month” award.