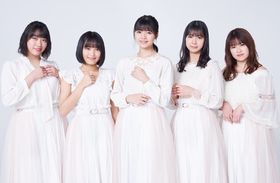 Kobushi Factory (こぶしファクトリー; Magnolia Factory) is a Japanese pop girl group, managed by Up-Front Promotion and part of Hello! Project. The group's name embodies several meanings; the elegance of the Japanese kobushi magnolia blossom, which itself signifies welcome, friendship, and trust in floriography, and the strength symbolized by a clenched fist (握りこぶし; nigirikobushi). "Factory" represents the inheriting of the spirit of senior group Berryz Kobo as they went on indefinite hiatus, and the members wish to become a close, long-lasting unit just like them.

The group's first indie single was simultaneously advertised with their name, released and sold as a venue only exclusive during the "Week End Survivor" stage play in which each member was to participate, beginning in March 2015. On June 2, 2015, at the "Hello! Pro Kenshuusei Happyoukai 2015 ~June no Nama Tamago Show!~" concert, the group's major debut single was revealed in a surprise announcement, and was released on September 2, 2015.

The disbandment of the group was suddenly announced on January 8, 2020 through their official website. Their final live show will be taking place on March 30th at Tokyo Dome City Hall.

Their eighth major and final single, "Seishun no Hana / Start Line", is released this week on March 4th.