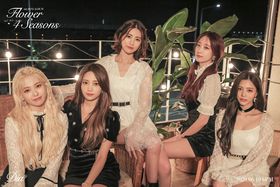 DIA (다이아) is a Korean pop girl group formed by MBK Entertainment that debuted in September 2015 as a seven member group. Their name is short for "Diamond" and is also an anagram for "Do It Amazing". They had been dubbed "little sister group T-ara", since both groups had belonged to MBK Entertainment.

The group is currently composed of seven members: Eunice, Huihyeon, Yebin, Chaeyeon, Eunchae, Jueun, and Somyi. They officially debuted on September 17, 2015, with their lead song "Waenji (Somehow)" from debut album Do It Amazing.

Huihyeon (formerly Cathy) and Chaeyeon decided to temporarily leave the group in December 2015 in order to try out for Produce 101, a new Mnet survival series that takes trainees from different agencies and have them compete to debut as a project group. Huihyeon returned to DIA as planned while Chaeyeon placed seventh on the show and spent a year promoting with the group I.O.I, while simultaneously promoting with her own group.

On August 14, 2018, DIA received their first music show win on SBS MTV's The Show for their song "Woo Woo" from their fourth mini-album Summer Ade.

Their sixth mini-album, Flower 4 Seasons, is released this week on June 10th.