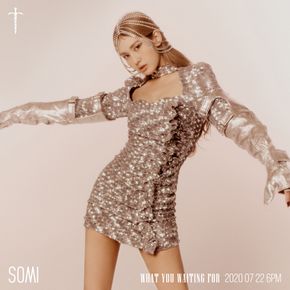 SOMI (소미) is a Korean-Canadian artist under The Black Label. She was a member of the Produce 101 project group I.O.I.

Somi was born in Canada to Dutch-Canadian father, Matthew Douma, and Korean mother, Jeon Sun Hee, granting her triple citizenship. She also has a sister named Evelyn who is eight years younger than her. Her family moved to South Korea when she was one year old. Because she was of mixed decent, Somi was often bullied in school and hated the way she looked. In 2013, she appeared on the Children's Day Special of KBS2's Let's Go! Dream Team II as part of a Taekwondo demonstration team from Midong Elementary School. In August 2014, she, her mother and her grandmother had a short appearance on episode 187 of Hello Counselor. She also had a cameo role in 2014 film Gukje Market along with her father and sister.

Somi auditioned twice for JYP Entertainment before being accepted into the company. In May 2015, JYP held a girl group survival show called Sixteen where trainees were pitted against each other to form the company's new girl group, TWICE. Somi made it to the final round, but was ultimately eliminated due to her lack of dance skills. In January 2016, Somi joined another girl group survival show, Mnet's Produce 101. She was the only trainee from her company to participate. Out of 101 female trainees, Somi ranked #1 on the final episode with 858,333 votes. Her #1 rank earned her the center position of the show's project group I.O.I. She promoted with the group from their debut on May 4, 2016 until their disbandment in January 2017.

Her second solo digital single, "What You Waiting For", is released this week on July 22nd.