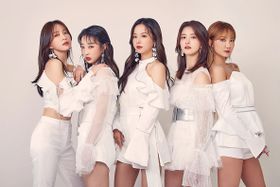 EXID (이엑스아이디) is a Korean pop girl group produced by Shinsadong Tiger that debuted under Gamgak Entertainment before switching to Banana Culture in 2014. The group debuted in February 2012 with the mini-album Hippity Hop. On April 30th, it was announced that Yuji, Dami and Haeryung had left, and that EXID would come back in June as a five member group including two new members, however it was not until July 31st when they where revealed as Solji (former member of 2NB) and Hyelin. Though the group's debut album gained some attention, it was not until 2014 that the group unexpectedly gained popularity with the single "Wiarae", which reached #1 on the Gaon Singles Chart four months after release due to a fan-recording of a live performance becoming a viral video. EXID released their second mini-album Ah Yeah in April 2015, to commercial success. They followed this with their first studio album Street in 2016.

In December 2016, Banana Culture announced that Solji had been diagnosed with hyperthyroidism, and that she would halt all her activities for the awards season of 2016-17, while the remaining four members continue on. This would keep her from participating in their third mini-album Eclipse in 2017. She was able to return later that year to participate in their fourth mini-album Full Moon, however only in the recording process. They returned with their second single "Naeilhae (Lady)" on April 2, 2018, only promoting as four, however, due to Solji still recovering from surgery. On September 6, Banana Culture announced that Solji would join EXID on September 7th to attend the 2018 Hallyu Pop Festival in Singapore as her first official schedule, which marked the formal return. EXID then made their Japanese debut with the single "UP & DOWN", a Japanese version of their hit track "Wiarae", in August.

It was announced on May 3, 2019 that members Hani and Junghwa would not be renewing their contracts with Banana Culture and that after the release of their new mini-album the group would be taking a temporary hiatus while the members pursue individual goals. Regardless, the full group released their fifth Korean mini-album WE in May and second Japanese single "Bad Girl For You" in December. Eventually, in 2020, the remaining three members of the group departed from the label as well: Hyelin in January, Solji in February, and LE in March.

Their second Japanese album, B.L.E.S.S.E.D, is released this week on August 19th.