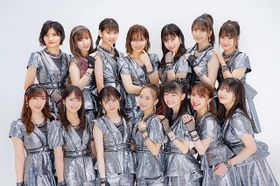 Morning Musume (モーニング娘。), colloquially referred to as Momusu (モー娘。), is a Japanese pop girl group produced by Tsunku, managed by Up-Front Promotion, and part of Hello! Project as its flagship group. Formed in 1997 on the talent show ASAYAN, Morning Musume quickly became, and still remains, one of Japan's top all-girl groups with a number of hit records and albums. The group holds the second highest overall single sales of a female group on the Oricon charts as of February 2012, with the Oricon record of most top ten singles with an amount of 64, and they have sold over 21 million copies in Japan alone. They were masterminded and managed by their producer Tsunku who is responsible for the composition of the majority of their songs and lyrics, production of their CD-sleeve covers, designing of their costumes and make-up and their live shows.

Morning Musume has been known for its ever-changing line-ups, with auditions and graduations creating different styles and dynamics to their music and performances. Beginning in 2014, their name was changed to reflect the present year as a way to help audiences identify member rosters over its seventeen-year history. Currently, the group is identified as Morning Musume '20 (pronounced Two-Zero).