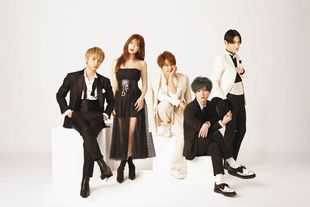 AAA (pronounced Triple A), standing for ATTACK ALL AROUND, is a five member group created in 2005 under the avex trax label. The group was formed through avex's auditions and originally consisted of eight members, five young men and three young women. who had acted in commercials and had experience being back dancers for other Japanese stars, such as Hamasaki Ayumi and Suzuki Ami. Two of the three female members left the group, Goto Yukari in 2007 due to health concerns and Ito Chiaki in 2017 to pursue a solo career, leaving Uno Misako as the sole female member, and leader Urata Naoya left at the end of 2019.

Along with being a singer and dancer, each member has expanded their fields into various other outlets, such as TV hosts, modeling, and acting in Hollywood movies, TV dramas, and theatrical plays. Uno Misako appeared in the Hollywood film The Grudge 2 in 2006, Nishijima Takahiro played the lead role in Japanese film Ai no Mukidashi (directed by Shion Sono) in 2008 and lead role along with Fukuda Saki in a drama Ghost Friends in 2009, and Ito Chiaki played the lead character in the Taiwanese drama Honey and Clover in 2008. Each member has also debuted as a soloist.

The group's debut single, "BLOOD on FIRE", was used in the Initial D live action movie. Their first full-length album and first mini-album, both titled ATTACK, were released on January 1, 2006. 40 of the 44 singles they released from 2007 on, starting with the single "Climax Jump" and their thirteenth single "Get CHU! / SHE no Jijitsu", have charted within the top 5 on the Oricon weekly singles, with the remaining four all charting in the top ten except for one. The group also has six albums that have claimed the #1 spot on the Oricon weekly albums chart.