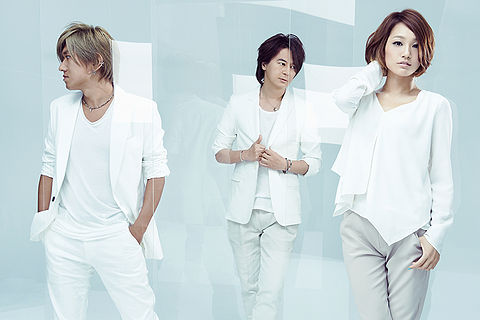 girl next door (ガール・ネクスト・ドア), written previously as GIRL NEXT DOOR (2008-2011)[1], was a three member Japanese pop-rock group with a predominantly electronic sound from Tokyo. Signed with avex trax, the band was formed in June of 2008 to commemorate the label's 20th anniversary. They debuted three months later with their single "Guuzen no Kakuritsu". They are also known colloquially as GND and Girl Next (ガルネク). The group disbanded in December 2013. 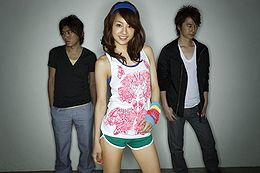 The formation of GIRL NEXT DOOR started in 2008 when CHISA met Suzuki Daisuke (ex-day after tomorrow) during her time at avex's Artist Academy. Before the two had met, CHISA was a dance performer around the Kansai area of Japan. She was scouted by avex and obtained a scholarship to their Artist Academy, where she joined the vocal and dance group Ma-Kiss.

Together they wrote demo tracks, which eventually caught the attention of avex's CEO Matsuura Masato, who in turn determined that they should debut. Seeking out a guitarist to join the band, Suzuki talked to his friend Inoue Yuji (ex-Wish*). He would join the group, and the three met on March 22nd.

News of the band was released three months later, in June, through BARKS. In the press release it was revealed that the group was made to commemorate avex trax's 20th anniversary, and that GIRL NEXT DOOR is the first group or artist to ever have the title "Produced by avex trax". News of their debut song was also released by BARKS, "Guuzen no Kakuritsu" is said to contain synth loops and sounds, piano music, and distorted guitar.[2]

In early July it was announced that GIRL NEXT DOOR would be a part of avex's yearly summer festival a-nation '08.[3] On July 17th the group had their first live performance at Shibuya-AX. During the live the members announced that their debut single, "Guuzen no Kakuritsu", would be released on September 3rd. The song was previously placed on various online music websites, and has since achieved over two million views. They had also revealed the release of two more singles, one in October and one in November.[4] 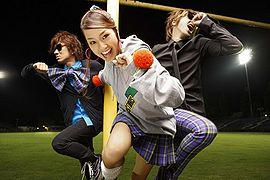 GIRL NEXT DOOR promoting "Drive away / Shiawase no Jouken" (2008)

When September 3rd rolled around, their debut single was released. It was heavily promoted, the titular track was used as theme songs in four different TV programs, a radio show, and an arcade game. The single would reach #3 on the Oricon weekly charts, where it charted for 15 weeks, selling 50,000+ copies. It is currently their #1 ranking single on their Oricon single ranking chart.[5] Two weeks later all of the information on their second single was released. "Drive away / Shiawase no Jouken" (their first double A-side) was to be released on October 8th. The first A-side, "Drive away", is described as an 120% energetic cheer song and is said to be the perfect karaoke song.[6]

On October 8th, their second single was released. It wasn't promoted nearly as much as their debut single, though it almost charted as well. "Drive away" was used as an commerical theme song for TTDC, while "Shiawase no Jouken" was used as an ending theme song in the TV program Ousama no Brunch. Their first double A-side single reached #3 on the Oricon weekly charts, and charted for eight weeks, selling 30,000+ copies. At the end of October, a press release about their third single was issued. "Jounetsu no Daishou / ESCAPE" (their second double A-side) was to be released on November 19th. "Jounetsu no Daishou", the first A-side, is described to be a sorrowful medium number, with lyrics written by CHISA that are based on a real-world experience.[7]

A day before the release of their third single, news about their debut self-titled studio album was released. With a tentative tracklist of 14 songs, it is slated to be released on December 24th, completing the four consecutive month release campaign.[8] The album is their last release to be produced by Ishizuka Tomoki. The next day, "Jounetsu no Daishou / ESCAPE", was released. It was promoted just as much as their second single, but it didn't chart as long. "Jounetsu no Daishou" was used as a theme song for the drama Gira Gira, while "ESCAPE" was used as a commercial theme song for Toshiba "au by KDDI W65T" products. Their second double A-side single reached #3 on the Oricon weekly charts, and charted for seven weeks, selling barely 30,000+ copies.

Finalized news about their debut studio album, GIRL NEXT DOOR, was released on December 5th. It is to have a winter theme, and every song has a tie-up in dramas, music programs, variety shows, information programs, commercials, etc..[9] When the 24th came up, the album was released. It became one of the most heavily promoted albums in Japan. However the album only reached #3 in the first two weeks on the Oricon weekly charts, having only one day at #1. In total the album charted for 11 weeks, selling 200,000+ copies. It is currently their #1 ranking album on their Oricon album ranking chart.[10] 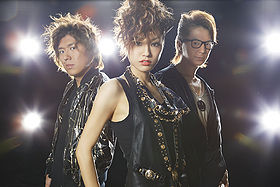 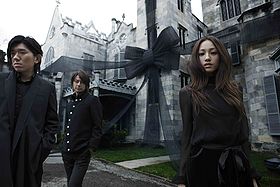 girl next door promoting NEXT FUTURE (2010) 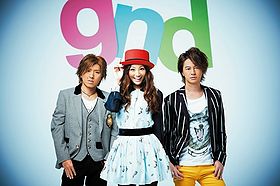 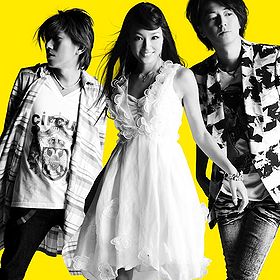