machine is a side project of Kiyoshi and HAKUEI. 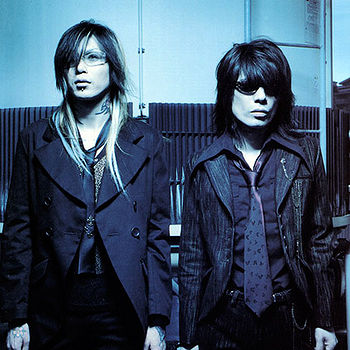 machine is the side project of Kiyoshi (known from hide with Spread Beaver and others) and HAKUEI (PENICILLIN). HAKUEI and Kiyoshi had initially known each other for many years prior because Kiyoshi was once PENICILLIN's producer. machine may have formed under the guise of 1997's live HAKUEI BATTLE KIYOSHI and HAKUEI's solo career, for which Kiyoshi often wrote music and played guitar.

machine's sound was a mix of industrial and hard rock. It was a very unique sound that is difficult to find in other visual-kei bands. Their image was that of two superheroes coming back from the future to teach the world how to rock. machine's first single was "Hero", it is also arguably their most well-known song. From 1999 up until 2001, machine had relased two lives, 3 albums, 1 live album, 4 singles, and 1 special box.

machine went on hiatus in 2002 after the last release of Salvation D-9. They come back together in the summer of 2004 with the announcement of a live in August 26, 2004, which was held at Shibuya O-EAST in Tokyo. They later had another live on November 21, 2004 at Yokohama Blitz, and four days later, machine released their latest single "Red Sundance." On December 8th, the live recording of their Tokyo show in August of that year was released.

On March 30, a new single will be released. There is no word of its title, yet.