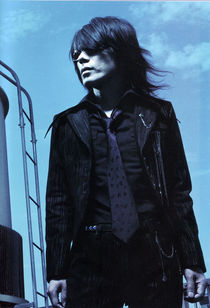 Kiyoshi is a Japanese musician, producer and guitarist for the band machine and Lucy. He became known as the lead guitarist of hide's band, hide with Spread Beaver.

Honma Kiyoshi is the lead guitarist of machine and the second guitarist of Lucy. He was apart of Virus (his first band), media youth and hide with Spread Beaver. Kiyoshi has also worked with many other Japanese musicians like Screaming Mad George, SUGIZO, PENICILLIN and many others. He has also been in two bands at once and produced PENICILLIN while in actively in media youth back in 1994. His other projects, other than bands and music, was the Rock Opera Hamlet where he rewrote Hamlet for modern purposes and was the musical director. Kiyoshi also wrote most of HAKUEI's, vocalist of PENICILLIN and machine, music for his solo career. He was also the producer of D(di:) and is now her composer.

Kiyoshi was known for his bright orange hair, "cyber/cyberdog" fashion and camo guitars. Back in the 90s, for lives, he had orange hair and always a fuzzy buttflap in any neon color to match his outfit. Nowadays, he's gone natural. His hair alternates from jet black to brown and his clothes are much more toned down. 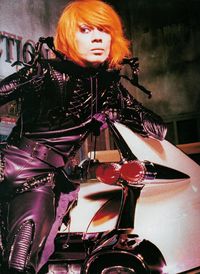