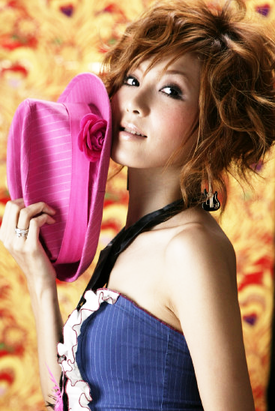 myco (マイコ) is a Japanese pop singer and anime seiyuu, signed to Toshiba-EMI. She rose to fame as the vocalist of the band, Changin' My Life. She is well known for being a seiyuu for Koyama Mitsuki in Full Moon wo Sagashite.

myco was born in Tokyo, on February 27th 1979. She started her career in 2001, when she became the vocalist for the band Changin' My Life. In 2002, the group was commissioned to work with manga-ka Tanemura Arina, to write music for the anime version of her manga, Full Moon wo Sagashite. The group recorded several songs for the series, three of which were used as ending theme songs. myco herself was signed on to become the seiyuu for the main character Koyama Mitsuki and her pop star alter-ego Full Moon.

At the end of 2003, myco left the group and decided to pursue her own solo career. After not releasing anything for over a year, there were rumors of her quitting her career as a singer. myco's new website was created on 2005.11.01 along with the new Changin' My Life website.

In 2004, myco made her solo debut with the single "Mata Koi Shiyou". After the release of another single, she released her debut album my-collage. Soon after these releases she took a hiatus from the musical world.

As of 2008, myco has returned to the music industry. She has since become the vocalist for the Japanese rock band QUINTILLION QUIZ.