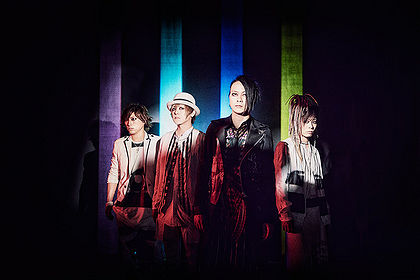 MUCC (ムック) is a Japanese rock and angura-kei band currently signed to Sony Music Associated Records. They made their indie debut in 1997, and later signed with Universal Music Japan in 2003 with their third studio album Zekuu on September 3rd.

MUCC was formed on May 4th, 1997 in Mito, Ibaraki Prefecture, Japan. The original member line-up was TATOO on vocals, Miya on guitar, HIRO on bass, and SATOchi on drums. Later in the year, in December, the band's first demo tape "NO!?" was distributed. 1998 started with a live at Mito LIGHTHOUSE on February 22nd. A month later, also at Mito LIGHTHOUSE, MUCC released their second demo tape "Aika". At this point the band had signed with the indies label Missitsu Neurose, which also has the bands cali≠gari and LAB. THE BASEMENT. MUUC's third demo tape, "Tsubasa wo Kudasai", was distributed on December 1st at their live at Mito LIGHTHOUSE.

Febraury 14th, 1998 was an important date as it was the bands first one-man live at Mito LIGHTHOUSE, and it was also HIRO's last live with the band. During this live they distributed a sticker and released their fourth demo tape "Shuuka". HIRO's replacement, Miya's childhood friend YUKKE, joined the band on February 22nd. MUCC's first tour titled "Shinrei Taiken Buss Tour Vol.1" started on July 24th and ended on August 30th, hitting nine stops. During the entire tour, the band's last demo tape "Aka" was distributed. Their second tour titled "1999~2000 Misemono Antique" went from December 12th to February 1st, 2000, hitting 16 stops. On December 25th MUCC's first mini-album Antique was released.

In 2000 the band had their first magazine interview in the 221st issue of the monthly publication FOOL'S MATE. In an instore event on June 8th at Harajuku's Like an Edison, TATOO changed his stage name to his real name, Tatsurou. The next day (which is known as MUCC day) two things were released, the second pressing of Antique, and their debut single "Shoufu / Hai". They had also contributed two songs to the compilation CD NON STANDARD FILE ~@6sight~. MUCC's first national tour, titled "Kichiku no Shikake Saiku", started on July 22 and ended with the finale on August 29th, hitting 18 stops. On August 14th, the band changed their name to the katakana-stylized ムック (pronounced Mukku).

On January 7th, 2001 MUCC joined the indies label DANGER CRUE RECORDS under MAVERICK D.C. GROUP. The first release on the label was their first full length album Tsuuzetsu. The album would be later re-released remixed and remastered as the album Tsuuzetsu ~Inshou Chigai~ on June 17th, and as a third pressing as Tsuuzetsu on June 10th, 2002. Their summer tour "Koi Hanabi Kurui Saki 99 Natsu" began on July 13th and concluded on September 18th, hitting 15 stops. Just after the tour started, on July 15th, the twin singles "Akaban" and "Aoban" were released. Their second mini-album, Aishuu, was released on December 25th.

2002 began with the creation of MUUC's own label Shu, which is a sub-label of DANGER CRUE RECORDS. During this time their official fan club called Shuu no To was also created. The new single "Fu wo Tateru Uta" is the first to be released through their own label. This single started off their 2002 winter tour titled "Aishuu no Kiiroi Handkerchief", which went from January 21st until Febraury 24th, hitting 11 stops. A special single "Suisou" was sold by the members themselves on June 9th at the Like an Edison store in Shinjuku, Tokyo. The next day the second pressing of "Fu wo Tataeru Uta" was released. September 6th (which is known as reverse MUCC day) was the release date of their second full length album Houmura Uta. The limited first pressing sold out quickly, so a second pressing was released next month on the 18th. This pressing came with MUCC's first PV in CD-EXTRA format. The album was re-released again on August 17th, 2004. 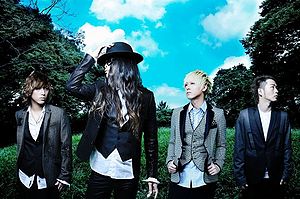 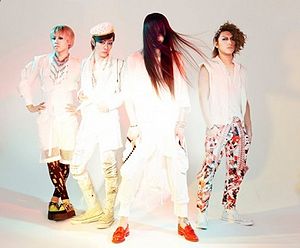 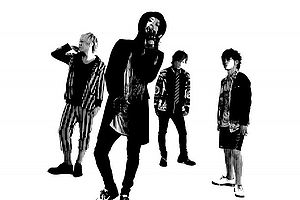