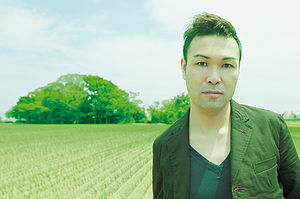 DAISHI DANCE (ダイシ・ダンス) is a Japanese pop, electronic, and house musician and DJ born in 1976. He has worked with a number of related artists, some of which are STUDIO APARTMENT, FreeTEMPO, and COLDFEET. DAISHI DANCE records under the Apt. sublabel of indies label NEW WORLD RECORDS.

As a DJ, DAISHI DANCE preforms in the heart of Sapporo, creating a varied amount of House, Club, and Dance styles that feature vocals that convey feelings such as grief, discontent, harmony and love. He also uses three turntables in a hybrid style. He has played at events alongside other artists like labelmate STUDIO APARTMENT and FreeTEMPO. He had also worked alongside Morita Masanori (of STUDIO APARTMENT) as the duo MUsEUM, which hosted and performed at their eponymously titled events at Club Space Lab YELLOW in Roppongi until its closing in June of 2008.

On July 2, 2008, DAISHI DANCE released "the Ghibli set", which contained 12 licensed remix songs featured in movies created by Studio Ghibli. The album reached number #12 on the Oricon Album Chart and kept its position for three weeks.