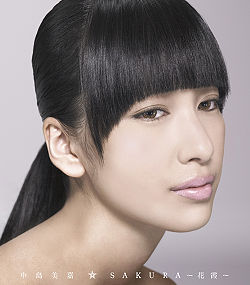 "SAKURA ~Hanagasumi~" is Nakashima Mika's 25th single. The title song was used as the Panasonic Card Aijou Size Omakase Kirei-hen CM song from January 25th 2008 onwards. The "DAISHI DANCE" remix version was downloadable from January 30th 2008, and the "main version" had a preceding digital download from February 6th 2008 onwards. The b-side, "conFusiOn", was used as the Kanebo KATE CM song. This single charted for six weeks and sold a total of 24,297 copies.