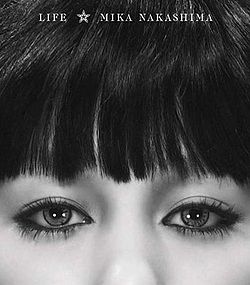 LIFE is Nakashima Mika's 23rd single. The first press included a picture label. LIFE was used as the theme song for the dorama LIFE, starring Kitano Kii and Fukuda Saki. The b-side IT'S TOO LATE was used as the Kanebo KATE CM song which starred Nakashima herself. On the same day, Nakashima released her sixth PV clips collection, FILM LOTUS VI (not featuring LIFE). The song itself has been described as pop, as compared to the gospel-inspired singles released during YES' period. Excluding the NANA period, this is Nakashima's highest charting single since SEVEN, three and a half years ago and highest selling single since Yuki no Hana, four years ago. In September 2007, LIFE was awarded with a platinum Chaku-Uta Full certification from RIAJ. LIFE also came in as the #18 most downloaded song of 2007 by Recochoku. It reached #3 on the Oricon and sold 131,166 copies, making it the #57 single of 2007. In November of 2007, LIFE was awarded with a triple platinum Chaku-Uta certification from RIAJ. This single charted for 21 weeks and sold a total of 138,987 copies.

The PV for LIFE was directed by Fresh Milk. It features lots of extreme close-ups of Nakashima's face in the rain while she wears a pink parka.

There are five known versions of LIFE to be found in Nakashima Mika's discography. These include: