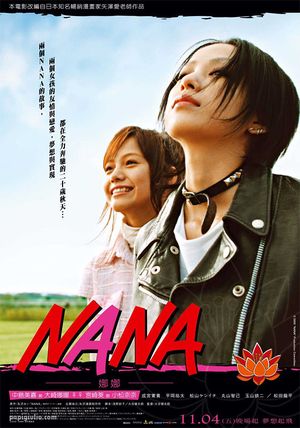 NANA (ナナ) is the 2005 film adaptation of the popular manga of the same name. It starred Miyazaki Aoi and Nakashima Mika as two girls who share the same name despite having very different personalities.

The film was directed by Ootani Kentarou and released September 3rd, 2005. DVD editions of the movie were released March 3rd, 2006. A sequel was released in December 2006, with most of the original cast reprising their roles.

NANA begins with a performance by the Black Stones before bassist Ren (Matsuda Ryuhei) announces he is leaving the band to join Trapnest, Japan's most popular band. Vocalist Oosaki Nana (Nakashima Mika) is heartbroken but accepts it, and two years later is on a train to Tokyo (but not for Ren). She meets Komatsu Nana (Miyazaki Aoi) on the ride there. The two go their separate ways but meet up again when they are searching for apartments, and both Nanas move in together after agreeing to share an apartment. Throughout the movie, Komatsu Nana (nicknamed "Hachi" during a shopping trip) becomes close with Oosaki Nana and they become best friends. Their problems only help to bring them closer, with the turning point being when Hachi leaves her boyfriend and Nana gets back together with Ren.

Overall, the film follows the manga closely and ends shortly after Hachi is introduced to Trapnest.

In addition to the merchandise being sold for the manga, Sanrio teamed up with the marketing department of NANA to create Hello Kitty/NANA collaboration items, including cell phone accessories, plush dolls, and writing utensils featuring Hello Kitty as both Nanas. Tshirts, clearfiles, postcards, wrist accessories, several pieces of jewelry, and many posters were also released.

A photobook was released a month before the film's premiere. It contained several scenes from the film, interviews with the cast, lyrics for the music used in the film, and an interview with NANA creator Yazawa Ai.

The following items were all released to further promote the movie, with both of its musical stars (Ito Yuna and Nakashima Mika) releasing singles as their characters from the movie. Both singles hit the top of the Oricon, but ultimately Ito Yuna sold more singles despite Nakashima Mika's being on the charts longer.