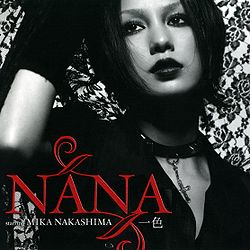 Hitoiro is Nakashima Mika's 20th single, and the second under the name NANA starring MIKA NAKASHIMA. The songs on the single were used throughout the course of the movie NANA 2; which starred Nakashima herself. This single is the only follow-up to Nakashima's GLAMOROUS SKY, which was used similarly for the first NANA movie. The song Hitoiro was composed by TAKURO from the famous rock band GLAY; with lyrics by Yazawa Ai, the author of the NANA manga series herself. The song is described as a "dramatic rock ballad". The coupling track, EYES FOR THE MOON, was completely composed and written by TAKURO himself. This single was followed by the only "NANA starring MIKA NAKASHIMA" album, THE END, released on December 13th, 2006. Because this single sold 50,773 copies in 2006, it became the #174 single of the year. It also went on to sell 45,770 copies in 2007, making it the #174 single of that year as well. Hitoiro was also ranked #37 most downloaded song of 2007 on Recochoku.