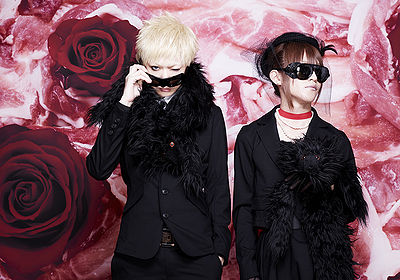 ZORO (ゾロ) was a two member Japanese pop-rock band with an electronic sound from Tokyo. They formed as a trio without a drummer in January of 2007, although they didn't publically reveal their activities until March. ZORO is an oshare-kei group, with vocalist Ryuji having the most colorful and unusual fashions. The band was signed with SKY CRUE RECORDS (2007-2010), a sub-label of DANGER CRUE RECORDS. They are now on the indies label Jesse.

On December 27th, 2010 it was suddenly announced that ZORO will be going into a hiatus after their one-man live Hallelujah on December 29th at Shibuya C.C.Lemon Hall. Currently, no official statement has been released pertaining as to why.[1] On the 29th, during the concert and later through their official website, it was revealed that both Taizo and Yuya are leaving the group.[2] Ryuji had said during the one-man that ZORO would not disband, and would continue with activities in the future.[3] 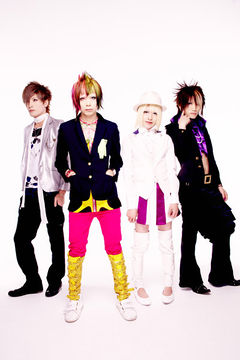 ZORO formed sometime in January 2007 in Tokyo, Japan. They started without a drummer with a member line-up of Ryuji on vocals, Tatsuhi on bass (both ex-Soroban), and Taizo (ex-Mouse) on guitar. ZORO made themselves known publically in two months later, and they had their first live on March 5th at LIQUID ROOM ebisu. After two lives at Takadanobaba AREA, the first on March 15th and the second on April 2nd, the band contributed their song "1888" to the compilation album hévn "Ura★Kaizoku Ban." No.004 (which was released on April 15th).

A live at Takadanobaba AREA on April 17th preceded the group's participation in two events. The first was "SHOCK WAVE ~Apollo~ vol.1" on April 24th at Takadanobaba AREA, while the second was "hévn no Omatsuri☆Ten Made Tobou!!" at Shibuya O-EAST on May 15th. Before Yuya (ex-Soroban) would join ZORO as their drummer on June 11th, the band had two lives: number one at Osaka MUSE on June 4th and number two on the 6th at Nagoya BOTTOM LINE.

For the rest of June and the entirety of July they would partake in a tour and two events both organized bv hévn magazine. The three dates tour titled hévn no Omatsuri☆Ten Made Tobou!! ~Tounaka TOUR~ was based in Tokyo, Osaka, and Nagoya. The concerts were at/on: Osaka MUSE on the 15th, Nagoya HEART LAND Studio on the 17th, and Shibuya O-WEST on the 19th. The events were both called "hévn no Omatsuri☆Ten Made Tobou!!", with the one on the 1st at having Meguro Rockmaykan the subtitle of "Kantou Kinkou Hen", and the one on the 8th at Urawa NARCISS having the subtitle of "Kantou Kinkou & Urawa NARCISS-san Iwai Hen".

Beginning August was the mega-event "SCUBER DIVE ~Shibuya ga Taihen~" on the 2nd, with ZORO playing at Shibuya O-WEST. Two days later at HEAVEN'S ROCK Saitama Shintoshin VJ-3 the band was a part of Ruvie's organized live titled "~Ruvie Live chain #2007 "noRain noRainbow"~". In two consecutive days starting on August 14th they had concerts at Osaka MUSE and Nagoya CLUB QUATTRO respectively. The last live activities of the month was the "Kinkyuu Shoushuu -Live at LIQUID ROOM-" event at LIQUID ROOM ebisu on the 17th. ZORO's first release came on August 29th with their first mini-album APOLLO. The mini-album reached #209 on the major Oricon charts, where it charted for a week.

During September the group only participated in another hévn magazine organized tour, this time called hévn no Omatsuri☆Ten Made Tobou!! ~Soukan 5-shuunen Kinen Zenkoku TOUR Daichidan~. It began on the 2nd at Sendai HooK and concluded on the 18th at LIQUID ROOM ebisu, hitting seven stops altogether. Before two events in the last weeks of October ZORO played three concerts. The first of which was at Takadanobaba AREA on the 3rd, with the second at Osaka MUSE on the 11th and the third at Okayama CRAZYMAMA 2nd Room on the 13th.

The aforementioned October events were on the 21st and the 30th at Takadanobaba AREA and HEAVEN'S ROCK Saitama Shintoshin VJ-3 respectively. They were in order: PS COMPANY's "Chichuu Roukaku Sono 62" and the FM NACKS' "FM NACK5 19th anniversary Nignteen's Map Halloween Party". ZORO held their first sponnored event titled -Tsuki-teki Ai- "Mekakushi no Ura no Uso Dai Ichihan" on November 11th at Ikebukuro CYBER. The second part of that was held on December 12th, also at Ikebukuro CYBER with a subtitle of "Mekakushi no Ura no Shinjitsu Dai Nihan". Bridging the two events was a live on November 17th at Nagoya BOTTOM LINE and SCREW's sponsored "Unknown shudder... vol.2" on the 25th at Takadanobaba AREA. The last activity of the year was the "ESP Entertainment Group Presents stylish wave COUNT DOWN '07-'08" event at Yokohama Akarenga Souko 1-goukan 3F Hall on December 31st. 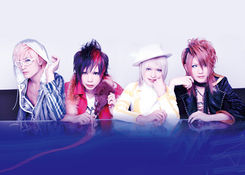 2008 started of with only three lives in January. The lives were in Tokyo (Shibuya CLUB QUATTRO on the 10th), Osaka (Osaka MUSE on the 21st), and Nagoya (HOLIDAY NAGOYA on the 22nd). ZORO had their first one-man oncert called M・G・A on February 2nd at Ikebukuro CYBER, which completely sold out.

The rest of February was made up of three lives and an event. The lives began at HOLIDAY SHINJUKU on the 15th and concluded at Osaka MUSE on the 28th. The lone event was the 71st part of the PS COMPANY sponsored "Chichuu Roukaku" series. ZORO then released their debut single "Lost Technology" on March 5th. The single would reach #8 on the indies Oricon charts, and #84 on the major charts where it charted for a week.

For their last two days in March along with the month April the band were one of the acts in the Burning circus tour presented by ZEAL LINK. The tour started on March 28th at Fukuoka DRUM SON and ended on April 15th at Omotesando FAB, altogether hitting five stops. April concluded with Guy's Family's "Guy's Party vol.4" sponsored event at Shibuya O-EAST on the 27th. The only activity for the band in May was another "hévn no Omatsuri☆Ten Made Tobou!!" event on the 15th at Shibuya O-EAST.

ZORO held their second one-man concert, titled Violence BOX, on June 15th at Takadanobaba AREA. Like their previous one-man concert this one had also sold out. On June 24th the group participated in Ruvie's sponsored "picture's" at LIQUID ROOM ebisu. The band, along with [_Vani;lla] and D=OUT, had a three-man concert at Takadanobaba AREA on July 6th as a part the 76th volume of PS COMPANY's "Chichuu Roukaku" series. Almost two weeks later (on July 18th) ZORO was in the "KING OF BATTLE ROYAL II" event at Yokohama 7th AVENUE. Completing July was CELLT's sponsored "C no Gekijou ~Sono Yon~" at Takadanobaba AREA on the 27th and the fourth edition of the "Absolute Domain -Zettai Ryouiki-" events on the 30th at Nagoya E.L.L.

In 2008 ZORO participated in both SCUBER DIVE's mega-events "Naniwa ga Taihen" and "Shibuya ga Taihen". They were in Osaka on August 1st and played at Osaka MUSE, and three days later they were in Tokyo and played at Shibuya O-WEST. On August 20th the group released their debut album "COSMO" -Stainless Music-. It is their first release to come with an optional DVD and it also contains their first PV. The album reached #103 on the major Oricon charts, where it charted for a week. Finishing off August was the third volume of their Tsuki-teki Ai sponsored events, called Mekakushi no Ura no Keikoku, at Takadanobaba AREA on the 27th.

To support and promote the release of their debut album, the band headed out on their first tour. This began on September 16th at OSAKA MUSE and concluded on October 2nd at LIQUID ROOM ebisu, hitting seven stops altogether. About two weeks after the tour's finale ZORO had their third (sold out) one-man concert. It was titled Shibuya K・I・T・S・U・N・E Kari Sadistic Hunter and was held at Shibuya O-WEST on October 17th.

Starting on October 25th at HEAVEN'S ROCK Saitama Shintoshin VJ-3 ZORO was a part of four dates on PS COMPANY's Chichuu Roukaku tour. The other three dates were: November 3rd at Kawasaki CLUB FLEEZ, November 8th at HEAVEN'S ROCK Kumagai VJ-1, and November 9th at SUNPHONIX HALL in YOKOHAMA ARENA. After a live on the 16th at Takadanobaba AREA, the band played a part in the "Starlight★Revolution Vol.1" event at Shibuya BOXX on the 26th, presented by Cure magazine.

For the last month of 2008, ZORO had their part in five events. The band, along with Irokui. and SCREW, had a three-man concert at Takadanobaba AREA on the 6th as a part the 86th volume of PS COMPANY's "Chichuu Roukaku" series. On the 8th and then the 10th they played in two "Absolute Domain -Zettai Ryouiki-" events at Esaka MUSE and Nagoya E.L.L respectively. Six days later they were in hévn magazine's "hévn no Omatsuri☆Ten Made Tobou!!" at Takadanobaba AREA. The last of the five events, "JACK IN THE BOX 2008", was organized by their label's parent company MAVERICK DC GROUP. It was at Nippon Budoukan on December 27th.