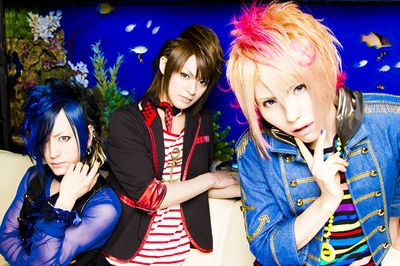 ALiBi (アリバイ) was a three piece Japanese pop-rock band. They were a oshare-kei band that formed sometime in early 2008, and were signed to the indies label LOOP ASH RECORDS. Each member had a color that plays a part in costumes, promotional images, CD/DVD cover designs, etc. In order, those colors are: Kai (yellow), Kae (red), and Fumiya (blue).

After their November 21st oneman NEXT NEW STAR at Ikebukuro BlackHole, ALiBi will be in a hiatus. Soon after, they would disband and Kai would go on to become the vocalist for UNiTE.. 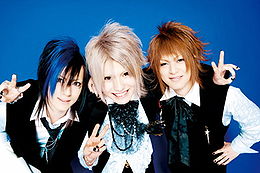 ALiBi was formed sometime in early 2008, the exact date unknown, by vocalist Kai (ex-Mouse), guitarist Kae (ex-LILAC BERRY), and bassist Fumiya (ex-MAG). The band wouldn't have an official drummer, but would use Roa Kenji (ex-CODE) as their recording and live support drummer. They soon signed to the visual-kei and oshare-kei indies label LOOP ASH RECORDS.

Their first batch of official activity started with the release of their debut single "★" on May 7th. It reached #15 on the indies Oricon chart. This was also the start of a three consecutive month single release plan. The first two singles were only available through Like an Edison CD shops. Before the next single the band performed their first live on May 30th at Shibuya BOXX as a part of the "STAR GATE 2008" event.

On June 4th, ALiBi took part in the "JUNE BRIDE" event at Ikebukuro CYBER. The next day, they released the second entry and their second single, "★★". This reached #11 on the indies Oricon chart. Again before the next single they partcicpated in another event, this time the "Junpuumanpan~Fuukou Ryoukou" event at Saitama Shintoshin VJ-3 on June 15th.

The band's first nationally available single "★★★", which was also their third single and the last of the three consecutive month single release plan, was released on July 2nd. It also reached #11 on the indies Oricon chart, and also reached #196 on the major chart where it charted for a week. The month ended with the "SHOCK WAVE -Apollo- vol.16" event at Takadanobaba AREA on the 18th.

During August they were a part of a three date tour. It was h'evn magazines' sixth anniversary tour titled h'evn no Omatsuri★Ten made Tobou!! ~Bangaihen~. This was at/on: Urawa NARCISS on the 9th, Kashiwa Zax on the 17th, and Ikebukuro CYBER on the 19th. The rest of August and September was met with six more events, spanning from August 13th to September 30th. Some of note are two Kiteru! BAND sponsored events: "Kiteru! Akimatsuri '08" on September 3rd at Shibuya O-WEST, and "Kiteru! Kouyasai '08" on September 3rd at Meguro LIVE STATION.

On October 1st the band started another three consecutive month single release plan with the release of their fourth single "Pikapika no Ichinensei". Like the previous campaign, the first two singles of this plan were available only through Like an Edison CD shops. Also during October were three events: Ap(r)il's "Hello,Hello,Hello vol.2" event at Takadanobaba AREA on the 5th, one of the "Shock Edge the Live! 2DAYS" events also at Takadanobaba AREA on the 13th, and a Kiteru! BAND sposnored event called "Kiteru! Soukou Yomatsuri '08" at Shibuya BOXX on the 23rd.

November began with two ClearVeil CD release events titled "The future of despair ~Soko ni Arumono~". They were at Takadanobaba AREA on the 2nd and Nagoya CLUB QUATTRO on the 3rd. The second entry and their fifth single "Seishun no Ninensei" was released two days later on the 5th. The same day, ALiBi participated in the "Doki V-Kei Dakara no Tai-Undou-kai" event titled "Chiku Taikou-sen★Tokyo Taikai" at Takadanobaba AREA. Another ClearVeil "The future of despair ~Sono ni Arumono~" event took place at OSAKA MUSE on the 8th. The second of the "Doki V-Kei Dakara no Tai-Undou-kai" events was called "Chiku Taikou-sen★Nagoya Taikai" and was at Nagoya HEARtLAND on the 9th, finishing off the month.

At the start of December ALiBi held their first one-man concert live called Meguro DE Ciao★ ~Waku×2☆Doki×2☆Hatsu Date~ at Meguro LIVE STATION on the 1st. A couple days later, on the 3rd, the final entry of the second single plan and their sixth single "Namida no Sannensei" was released. This would be their second nationally available single. Ending off the month (and in turn the year) was a series of six events and lives, from the 3rd to the 31st. Two of notice are hixro's (from ν[NEU]) birthday event "Brand NEU Day" on the 3rd at Meguro LIVE STATION, and Aki's (from -OZ-) birthday event "FUN TO FAN" on the 8th at Niigata JUNK BOX mini. 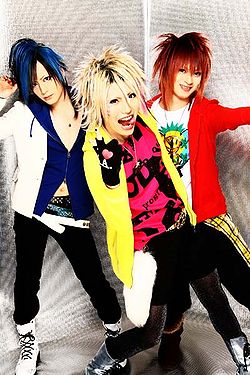 The new year began with two LOOP ASH PRESENTS lives called "Junpuumanpan" on January 22nd and 26th, both at Meguro LIVE STATION. It was also during this time that their support drummer Roa Kenji left to join a new band, Goshujin-sama Senyou Kisai Gakudan -Virgil-. They would acquire Kazumin (ex-[arcana]) as their new recording and live support drummer.

February was only two events, the first being Ellseed's sponored event "Ell no Himitsu no Heya Vol.1" at Takadanobaba AREA on the 16th. The second was aicle's second year anniversary live "Neko to Nihon no Rousoku" at Harajuku ASTRO HALL on the 22nd. March was a bit more busier for the band, as they released their debut album.

March started with another Kiteru! BAND sposnored event titled "Kiteru! Harumatsuri '09" on the 5th at Shibuya BOXX. On the 19th ALiBi had their first sponored event, called "Ciao★nival", at Meguro LIVE STATION. An event and two lives preceded the release of their album; they were on the 20th, 23rd, and the 28th. The first one was one of E'm~grief~'s two days sponored events collectively titled "Reizvoll Konzert".

On march 29th their debut album ЯOCK★STAR was released. The album is a bit more of a best of than a studio album, though this release is nation-wide and not limited to Like an Edison CD shops. It contains all the songs from their singles "★" to "Seishun no Ninensei", with two new songs ("Rainbow Story" and "Яock The Be@t"), and a new version of their song "Akiba Tankentai".

April started off with a three-man concert live with Ap(r)il and Bergerac called World is myself on the 1st at Shibuya O-Crest. After a live at Nagoya ell.SIZE on the 2nd, the band participated in five events and lives, spanning from the 3rd to the 28th. The last two dates were more LOOP ASH PRESENTS "Junpuumanpan" lives, and they were both at Meguro LIVE STATION on the 24th and the 28th.

On May 3rd they took part in a special live, which presented by Like an Edison NAGOYA and produced by KISAKI (of UNDER CODE PRODUCTION). It was Nagoya BOTTOM LINE's 20th anniversary live titled "Kyoumei ~Nagoya Suppression~" and was held at Nagoya BOTTOM LINE.

The band then took part in one of Flypan's (ex-the Pumpkin Head) sponored events "Taka Rock Festival in Tokyo -Second Day" on June 10th at Takadanobaba AREA. After a live on June 18th at Ikebukuro CYBER they were one of the bands in the "Revolutions" -JUNE BRIDE TOUR 2009- tour during the rest of June. It was a three date tour, taking place at/on: Takadanobaba AREA on the 14th, Nagoya ell.FITS ALL on the 20th, and OSAKA MUSE on the 21st.

LOOP ASH RECORDS celebrated its ninth anniversary with a tour called Loop Hiraki. This started on July 1st at SUNPHONIX HALL in YOKOHAMA ARENA and ended on July 17th at Takadanobaba AREA, hitting seven stops altogether. At the very start of the tour, they started the latest three consecutive month single release plan with their seventh single "Red Cherry Pie". Each would be a one-track single, produced by the member who shares the singles' color. ALiBi would then return to SUNPHONIX HALL in YOKOHAMA ARENA for the "stylish wave MAX '09" event on the 18th. On two consecutive days starting on the 24th, they performed in the "Magical STARlighT Festival" lives at OSAKA MUSE and Nagoya HEARTLAND respectively.

The festivals led into the CRUSH OF MODE -HYPER HOT SUMMER '09- tour, which took place in July (one date) and August (the rest). It started on July 26th at Shibuya O-EAST and ended on August 28th at Sendai HOOK, hitting seven stops. On August 5th they released the second entry and their eighth single "Blue Berry Train". During the tour they played in two dates of the Electric☆Traveler tour on August 16th at SUNPHONIX HALL in YOKOHAMA ARENA and on the 22nd at Nagoya ell.SIZE. Two additional dates of the CRUSH OF MODE tour, titled "CRUSH OF MODE -EXTRA EDITION-", were held on the 25th at Kanazawa AZ HALL and on the 27th at Niigata JUNK BOX mini. August concluded with the "SUMMER GAME 2009" event at Shibuya O-WEST on the 31st.

In September the month started with the release of the last single in the third release plan and their ninth single "Yellow Banana Surfing". ALiBi had their third one-man concert live called Shibuya DE Ciao★ ~Train×2 Dai Bousou~ on the 22nd at Shibuya BOXX. This is also their first filmed concert, with the DVD being released later in the year on December 25th as Shibuya DE Ciao★. For the next two months, ALiBi would be partnered up with other bands for two-man events.

For three dates in October and November the band was paired up with Juliette for the "Wonder Date" events presented by Like an Edison. They took place on October 16th at Nagoya ell.SIZE, the 18th at Osaka SINKAGURA, and on November 1st at Meguro LIVE STATION. Like an Edison also presented the seven consecutive events in seven consecutive days starting on November 1st. Each day ALiBi was paired with a different band, the list of them are: Juliette, Jewel, DragonWAPPPPPPER, SOMATIC GUARDIAN, LiZ, Goshujin-sama Senyou Kisai Gakudan -Virgil-, and ClearVeil.

On November 20th they held their second sponsored event titled "Ciao★nival vol.2 -Doeryaa Sugyaa Yoru daga ne-", it was presented by LOOP ASH RECORDS and was at Nagoya BOTTOMLINE. The event was before a string of seven lives, beginning on November 21st at Takadanobaba AREA and ending on December 19th at Motoyawata ROUTE14. One of note was the two-man concert live with Ap(r)il called Hello "A×A" Date on November 29th at Shibuya CHELSEA HOTEL.

In the midst of the previous lives ALiBi released their debut mini-album RaInBoW CoLoRs on December 2nd. It was released in a CD+DVD only format and features the band's first PV. The year's end started with a two date one-man concert tour titled Nusumareta ARiBike wo Sagase during mid/late-December. This was held at Nanba ROCKETS on the 12th and at Takadanobaba AREA on the 23rd. 2009 concluded with three lives, one on the 30th and two on the 31st.