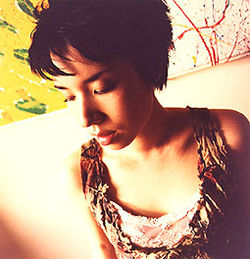 Angelina (アンジェリーナ) is a bilingual Japanese-American pop singer-songwriter signed under Nippon Columbia. In 2003 she recorded her demo, "babybayboo", and was subsequently offered a record deal. Only after a year of recording, Angelina went on an indefinite hiatus in 2004.

Angelina Esparza was born in Los Angeles, California, USA to a Spanish-American father and Japanese mother. The family moved to Okinawa soon after her birth and she was brought up there.

In 2002, Angelina started to pursue a career in music. That year she was featured on DJ KRUSH's Shinsoo ~The Message at the Depth~. In 2003 she recorded her demo single with former Megadeth guitarist Marty Friedman, who produced her demo, "babybayboo", which lead to a contract with Columbia Records. The demo was then released as her debut single.

Angelina is well known for her use of vibrato to create a unique voice. Although her music may be labeled as folk, her album proved to vary in a broad range of genre from rock to house to ballads.

She is currently on an indefinite hiatus since she released her last single in late 2004.