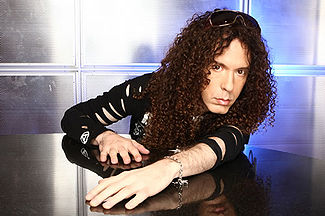 Marty Friedman (マーティ・フリードマン) is an American-born guitarist and composer who is signed to the avex trax record label. He is best known in the US for his work with the metal band Megadeth. In recent years Friedman has become a predominant force in the Japanese rock music world for his producing, and composing songs for various artists.

Martin Adam Friedman was born and raised in Laurel, Maryland. After taking an interest in music he began to teach himself how to play the guitar. In the 1980s he begain playing guitar for various bands, and eventually became well known for joined Megadeth in 1990. He worked with the band for a total of five studio albums, leaving the band in Decemeber 1999.

Friedman currently lives in Tokyo, Japan and is fluent in Japanese [1]. He has stated that Japan has always felt like home to him, and he fell in love with it while on tour with Megadeth [2]. Living in Japan started to influence his works around the release of his fifth solo album, Music for Speeding. In his stories behind the songs on the album, he credits life in Japan for his insipartions [3]. He became the co-host along side former gravure idol Kumada Yoko for the TV Tokyo television show, Heavy Metal-san (ヘビメタさん). After the show ended in 2005, Square-Enix released a video game based off the program, Heavy Metal Thunder.

In 2003, Friedman started to compose music and produce various Japanese pop. He wrote and produced Angelina's original demo work, "babybayboo", which lead her to landing a record deal with major label Columbia Music Japan. In 2005 he signed on to work with hard rocker Aikawa Nanase. He worked as her bandmate on the recording of her third mini-album, R.U.O.K?!, and also went out on her tour for the album. Later that year he also went on tour with popstar Suzuki Ami on her AROUND THE WORLD Live House Tour.

In April 2006 Friedman landed another hosting job on the show, Rock Fujiyama, along with several co-hosts such as Shelly, Ayugai Ken, Hisatake Yorimasa, and Teranishi Rolly. The show ran until March 2007 and Friedman has since returned to focusing on his music career. He composed anison singer KOTOKO's "Kirei na Senritsu", which was used as the theme song to the Maria-sama ga Miteru anime series.

Recently Friedman has formed a new Japanese rock band, with singer Suzuki Shinichiro called Lovefixer. In 2008 he made his film debut as Paul Weinberg, an English language teacher in Inudo Isshin's Go-Go Datte Neko de. He has also released the TOKYO JUKEBOX album, which is made up of covers of Japanese pop songs.

This is a list of Marty Friedman's song compositions for various Japanese artists.