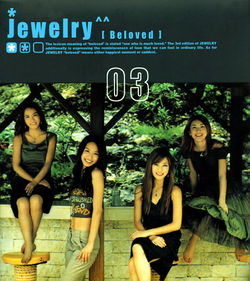 Beloved is the third album released by Jewelry. The songs "Be my love" and "Naga Cham Joha" were used as lead tracks. The song "Baboya" was also promoted. The image of this album is similar to their debut concept, very romantic and cute, with cute pop songs about love and relationships, but this time it had a mature edge to it. Both lead tracks reached high on Korean Music Charts.

Members During This Release