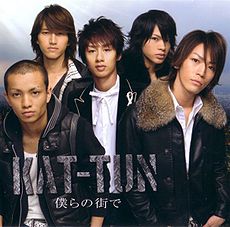 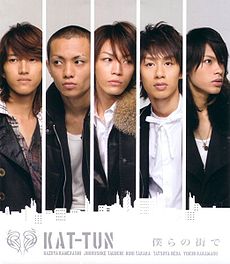 Bokura no Machi de is KAT-TUN's third single, after their canceled PURE ONE single. It was the first single not to include Akanishi Jin, who announced his hiatus the month prior. Bokura no Machi de was used as the theme song for the dorama Tatta Hitotsu no Koi, starring Kamenashi Kazuya and Tanaka Koki. It was released in three versions: a limited edition with a DVD, a first press edition with a bonus Christmas mix of one of their previous songs and a regular edition. The single was released one day later than all of the other singles that were released that week. Bokura no Machi de reached a peak position of #14 on the Global Track Chart in week 51 of 2006. It managed to reach the 13th position on the yearly charts with only 1 week's worth of sales counting toward the 2006 ranking. This single went on to sell 148,388 copies in 2007 as well, becoming the #44 single of the year. It charted for 17 weeks and sold a total of 558,491 copies.