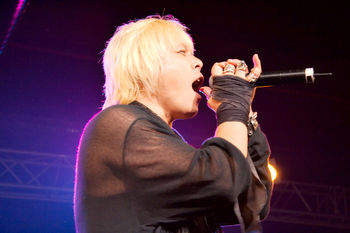 Endoh Masaaki (遠藤正明) is a Japanese singer/songwriter who is prominent in the area of soundtracks for anime and tokusatsu productions. He is best known as a member of the supergroup JAM Project. His solo career was unofficially started in 1993 but didn't take off until the release of his debut single "Forever Friends" in 1995. Since then he performed theme songs of many anime, videogame, and tokusatsu series. He's very good friends with Kageyama Hironobu whom joined him together in very short lived band named Metal Brothers. Nobody knows why they disbanded but in 2000, they worked together again in the supergroup JAM Project as the founding members. He is the only one besides Okui Masami in the group whose solo career is still going strong.