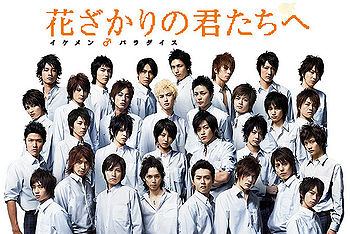 Hanazakari no Kimitachi e (花ざかりの君たちへ; For You in Full Blossom) is a Japanese dorama based on the shojo manga, Hana-Kimi created by Nakajo Hisaya. The series first aired on July 3rd 2007, on the Fuji TV channel on Tuesdays at 21:00. The series ran for a total of twelve episodes, with the last one airing on September 18th 2007.

There is also a Taiwanese drama based on the same story called, Hua Yang Shao Nian Shao Nu.

The story revoles around a young girl named, Ashiya Mizuki. She lives in the United States and becomes completely infatuated with a Japanese high jumper named, Sano Izumi after seeing him on television. Everything was fine until one day, Sano quits the sport. In order to get him to compete again Ashiya goes over to Japan, disguises herself as a boy, and attends his all-male school.

She is the Principal of the school. Played by Matsuda Seiko.

He is the leader of dormitory 1. He is played by Ishigaki Yuma.

He is the leader of dormitory 2. He is played by Mizushima Hiro.

He is the leader of dormitory 3. He is played by Kyo Nobuo.