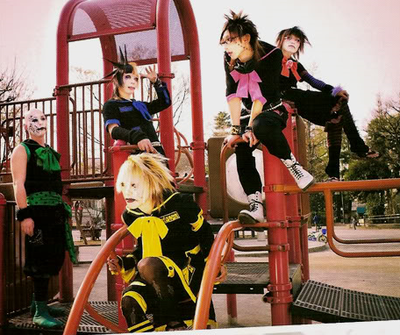 Himitsu Kessha Codomo A (秘密結社コドモA; Secret Child Society A) was a five-piece Japanese electro-rock band in the angura-kei scene. The band was formed by former Ryouki Tanteisha Macaroni vocalist Eiji in July of 2004. After losing their bassist in December of 2006 and kicking their drummer out of the band a month later, the group acquired three new members (including a second vocalist) and continued on as Kibou-YA Honpo in April of 2007. The new band barely lasted a year and disbanded in February of 2008.

Himitsu Kessha Codomo A then reunited without Dai on March 24th, 2008 for a one night revival live. 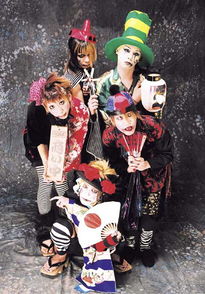 Himitsu Kessha Codomo A was put together on July 31st, 2004 by former Ryouki Tanteisha Macaroni vocalist Eiji with the rest of the member line-up being: Nie (ex-Khimaira) and newcommer Takken on guitars, Kouta (ex-MuseLu'Ciluk) on bass, and Dai (also ex-Ryouki Tanteisha Macaroni) on drums. Their debut single, "Rettou Jidai", was released four months later on November 7th. 2004 came to a close with the band's first time in an event, it was on December 31st at Esaka MUSE as a part of UNDER CODE's all night "Kansai Seiatsu 2004-2005" event. Their participation was released as a digest on the compilation DVD Kansai Seiatsu 2004-2005 four months later on April 6th, 2005.

Although their debut single was released on UNDER CODE, they didn't formally belong under the label until January 1st, 2005. A month later, on February 16th, Himitsu Kessha Codomo A released their second single "Ao to Haru to Boku to". Following this release the band had contributed a new song ("MY Ue e") to the compilation album High Style Paradox IV ~re acceleration~, which was put out on March 2nd.

In the summer, the group released their third single "Tenjouura Renbo" on June 15th. To celebrate the new single, Himitsu Kessha Codomo A held their first CD release commemorative event a few days later. The event was titled "Tenjouura Musical" and it was at Esaka MUSE on June 18th. A month later, on July 27th, they released their debut mini-album Kodomozumu. The six track mini had each member produce a song (5 out of 6), along with an instrumental opening the album. Completing the summer was the release of the band's fourth single "Rettou Koushinkyoku" on August 24th.

On September 29th at Osaka MUSE they held their first one-man concert called Yuuyake Machi no Kodomotachi. It was during this live that they distributed "Sayonara Hoshi to Boy" for free. Two months later on November 9th the new song along with "MY Ue e" would both be contributed to the compilation album High Style Paradox Special ~RARE TRACK COLLECTIONS~. Also in November Himitsu Kessha Codomo A were a part of a tour, a first for the band. The 11 date tour was UNDER CODE's Nihon Seiatsu 2005, which took place from November 3rd at BAYSIDE JENNY to the 30th at Tokyo LIQUID ROOM ebisu.

Finishing off 2005 was the release of a mini-album and a commemorative event to promote its release. The mini-album in question was Saihousou + Yokoku Ban, which was released on December 7th. The five track album had three new songs with two re-recordings of songs found from their first two singles, "Rettou Jidai" and "Ao to Haru to Boku to". The release event was titled "Tenjouura Musical Sono Ni" and was at HOLIDAY UMEDA on December 18th. 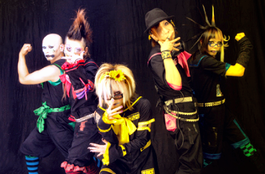 Kicking off 2006 were two consecutive commemorative events celebrating vocalist Eiji's birthday; "Saraba Misoji Konchiwa Misoichi ~Atai wa Madamada Ikirunosa" was on January 22nd at Osaka MUSE while the event on the next day had the subtitle of "Kouyasai" and was at the same venue.

The two aforementioned simultaneously released mini-albums were released on January 25th and called Otoko no Ko and Onna no Ko. Both of the six track minis had one re-recorded song on them that was found on their previous released mini-album Saihousou + Yokoku Ban. The end of the month had them contributing a new song to the compilation album SHOCK WAVE CD ~CROSS GATE 2006~, which was released on January 21st. Otoko no Ko and Onna no Ko were also the band's first releases that charted on the Oricon weekly charts. Otoko reached #283 while Onna reached #275, with each of the mini-albums charting for only a week.

In February there were two one-man concerts as HOLIDAY venues; the first of which was titled Kodomo Agitator and was at HOLIDAY UMEDA on the 12th. The second and last of the two, called Kodomo Destroy, was at HOLIDAY SHINJUKU on the 18th. At both of these lives, the one track single "Sakura Techou" was sold. A one-man concert was held on March 19th to commemorate the two previous ones; Tenjouura Muscial Sono San was at OSAKA MUSE.

Leading up to the release of their fifth (and last) single "Jinsei Game" and first DVD Seishun Tokusatsu, Himitsu Kessha Codomo A held two CD release commemorative events per month for three months. They were collectively titled "Seishun Tokusatsu Bangumi Himitsu Kessha Codomo A Jinsei Game", and were on the following dates: May 27th/8th at HOLIDAY OSAKA, June 24th/5th at Esaka MUSE, July 17th at Osaka MUSE, and July 18th at Esaka MUSE. On July 19th both the single and the DVD were released. "Jinsei Game" reached #163 on the Oricon weekly charts, while Seishun Tokusatsu reached #226. Each of the releases had only charted for a week. To celebrate the release of their single and DVD, the band had a one-man concert called Bakuretsu Kodomo Toshi at Harajuku ASTRO HALL on July 20th. It was during this live that they distributed "Yurei Johnny" for free.

In September, the group had three consecutive two-man lives with three different bands starting on the 16th, all at Osaka MUSE. The lives were all titled Seishun Dendekedekede, named after the movie of the same name. The first was with Guruguru Eigakan, the second with Dokusatsu Terrorist, and the last with the Pumpkin Head respectively. November proved to be the busiest month for the band, as it was during this time that it was announced that bassist Kouta would be leaving the band after the live on December 29th. To start the last activities with Kouta, they had planned three self-produced events ("Jingi Nagi Tatakai") with a one-man concert (Mikkakan no Shinshunki) coming after each one. Each of the pairs also happened at the same venue. The dates were on/at: November 4th/5th at HOLIDAY SHINJUKU, November 11th/2th at HOLIDAY NAGOYA, and lastly November 18th/9th at HOLIDAY OSAKA.

The events and lives culminated with the release of their fifth (and last) mini-album Seishun Kioku Sochi and second DVD Seishun Housou on the 29th. The mini was the only one of the two to chart on the Oricon weekly charts, where it reached #283 and charted for one week. To celebrate the release of their single and DVD, the band had a one-man concert called Teito Monogatari at Shibuya O-WEST on December 18th. Kouta's last live with the band, a one-man concert titled Kodomo Electronica, was held at OSAKA MUSE on December 29th.

When it was first announced that Kouta would be leaving the band in the beginning of November, it was also said that they would put out a best of album and a DVD of their last live in the New Year (2007). However, at the start of January, it was announced that without their bassist Himitsu Kessha Codomo A would go into an activity pause. Their first best of album Unou Shiki was released first on January 24th, with their third (and last) DVD Sanou Shiki coming out a month later on February 21st. Before any of those two releases were put out though, on January 20th, Dai was kicked out of the group due to allegedly leaking personal information and taking the band's money.

Without a rhythm section they decided to restart as a new band, Kibou-YA Honpo. First they acquired three new members starting with Hal (ex-Hanzaisha Hajimashita) as a second vocalist, then Ayu (ex-Dokusatsu Terrorist) as their new bassist, and finally Mizuto (ex-Oto Oni) as their new drummer. With new members and a new look, Kibou-YA Honpo started on March 21st, 2007. The new band barely lasted a year and disbanded on February 11th, 2008.

Since leaving Himitsu Kessha Codomo A, Kouta joined the Japanese rock and visual band 176BIZ on November 1st, 2007. When that group disbanded on March 16th, 2009, he moved onto Eiji's new group Sandwich de 120pun? nine months later as their support bassist on December 31st. He officially joined later on May 2nd, 2010. Himitsu Kessha Codomo A revived for a one time two-man concert with munimuni without Dai on March 24th, 2008. Eight months after the reunion UNDER CODE reissued their last mini-album with added extras, with a title of Seishun Kioku Sochi ~Sekai Hasshin Gouka Ban~, on November 5th.