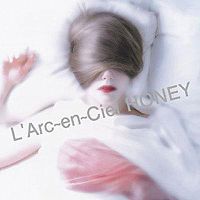 HONEY is L'Arc~en~Ciel's 11th single. It was released on the same day as Shinshoku ~lose control~ and Kasou. HONEY was used as the NTT's Kansai Communications Network CM song. This single reached #2 on the Oricon charts in its first week, losing to B'z' HOME for 15,000 units. It managed to reach #1 on the second week and sold 1,173,440 copies, becoming the #7 single of 1998. It charted for 33 weeks and sold a total of 1,238,414 copies. This is L'Arc~en~Ciel's best selling single.