Hysteric Blue (ヒステリック・ブルー) was a well known Japanese rock band, formed in the 1997 under the label of Sony Music Japan; consisting of Tama, Naoki, and Takuya. This band was discovered by the producer of the punk-rock band JUDY AND MARY, which was an example for hysteric blue, from their similar sound, but the young band started to get a unique and catchy sound. Their music style involved a fast and lively rock-pop in combination with punk, ska and metal. Three of their songs were used as theme songs in anime series, the first one was "Grow Up", used as the opening theme for Gakkou no Kaidan, the second one "Frustration Music" used as the opening theme for Vampiyan Kids and the last one, "Cocktail", was used as the ending theme for Spiral: Suiri no Kizuna. 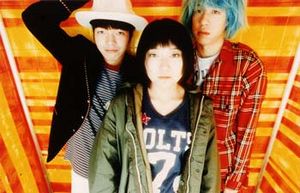 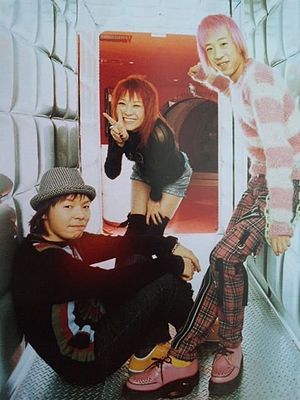 Hysteric Blue was formed in July 1997 by one girl, Tama, and two boys, Takuya and Naoki, and have their origins in Osaka, like many others. They were still high school students at the time. They started having live performances on the streets around Osaka Castle and at small music halls. Then, the band started to make demo tapes and sent them to people who were concerned in the music world, one of the tapes was received by the famous music producer, Masahide Sakuma, known as a producer of great musicians and bands like GLAY and JUDY AND MARY; the tape captured Sakuma's heart, and their debut was decided quickly. They made their debut with the first single "RUSH!" on October 31, 1998, only 3 months after they formed a band. As they had signed with Sony Music Entertaiment, and having Sakuma as the producer, same as JUDY AND MARY; they began to be compared with them, but the band developed a unique and particular sound and music style.

They had not too much relevancy until the next year, when they released their second single "Haru ~spring~" on January 21 of 1999. The single was a big hit, and they became one of the most popular groups in Japan, after that, they made their first appearance on the end-year TV program Kouhaku Utagassen. All this allowed them to release their first full length album baby Blue, an album with fast, twisted and catchy pop-rock songs with tracks like "Little Trip", " Candy", "Shiroi Inori", "Super Wing" and including their first singles "RUSH!" and "Haru ~spring~".

That same year, the band got more successful radio hits, with the songs "Naze..." and "Futari Bocchi", then, in 2000 they released their second full length album titled WALLABY, allowing them getting more hit singles like "Chokkan Paradise" and "Dear", the album, contained the early released hit singles "Naze..." and "Futari Bocchi", and this work had a more heavier sound and deeper lyrics, compared with baby Blue, WALLABY had a more rocker sound.

In the end of the year, the band released one of their more successful singles, "Grow Up". The song was used as the opening theme for the anime series produced by Pierrot Studios Gakkou no Kaidan. The song was included on their third full length album of the band, bleu-bleu-bleu, released in 2001, with an alternative rock wave, getting more success, with songs like the single "Daisuki".

Then, in that year the band kept on working, and released another successful single, "Reset me", a big hit in the same wave of "Grow Up". Time after that another new single was released, "Frustration Music" was the second song of the band used in an anime series, this one was used as the opening theme for "Vampiyan Kids". The next year, 2002, Hysteric Blue released their fourth full length album, MILESTONE, containing "Reset me", and another rock singles like "Bayside Baby" and "Frustration Music", the album involved a catchy rock-pop-punk, with light-metal electric guitars solos, and different alternative rhythms well combined in the songs.

In the same year, the band released their only one compilation album, Historic Blue, containing all their hits so far in that time. The album also contained two new songs, "Uwaki na Sport Car" and "Matsuri no Ato".

In 2002, another song of the group was used as the ending theme an anime, Spiral: Suiri no Kizuna, the song was "Cocktail", included on the single "Home Town".

Early in that year, the band released their fifth and last full length album JUNCTION***, which included "Cocktail" and another song titled "DOLCE ~Natsuiro Renbo~", the only single released of the album and the last one of the band. Then, time later in that year, the band was going through problems: the guitarist, Naoki, was blamed of sexual abuses in his department, but the situation was unclear and just preliminary, due this, the band decided to have a temporary break. Then, after many trials and interrogations the situation was proved, he was found guilty of multiple rapes and abuses against nine teen girls. The justice punished with fourteen years in jail.

After the situation, the band broke up early in 2004. Tama continued in a new band called Screaming Frogs as vocalist, releasing their first album frogs at beautiful sunset in that same year.

Takuya continued his career as a drummer playing for other bands like Hearts Grow, although he was not considered an official member of the band. In 2011, Tama and Takuya made ​​a new unit called Sabão.

In 2012, Takuya continues with Tama, but he is in a new project as the drummer of the Japanese rock band THE RHEDORIC.