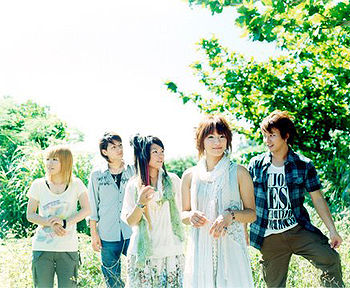 Hearts Grow (ハーツ・グロウ) was a Japanese pop/rock band. The band formed in 2004 and debuted as an indie band in 2005. After the release of two indie releases, the band signed to the major label Epic Records Japan in 2006. However the band officially disbanded a year after the release of their single "Sora" (theme song to Tetsuwan Birdy DECODE).

Before Hearts Grow formed, the band was divided into two bands. The women of the band were in a band called G-SEVEN, and the men were known as BAMBOO. In 2004, both of these bands disbanded and later joined together and formed Hearts Grow. 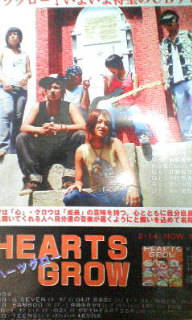 The group met in northern Okinawa at Ajisai Ongaku Mura (あじさい音楽村), a practice studio near an Okinawan high school. They began performing street lives in Okinawa. In 2005 they signed with the Ajisai Music indie label and released their first mini-album, HEARTS GROW.

High school band "Hearts Grow" CD sold out in two weeks. This high school rock band has energy. Last summer, a new high school band, "Hearts Grow," was born. Their CD came out in February and it sold 1,000 copies in two weeks. The six members are in their second and third years of high school. Motobu's popular band of teenagers, "Crimson", practiced in the same studio, "Ajisai Music Village", since their first year of high school. In music festivals throughout the prefecture, they won awards and grew from two different bands into one.

In late February, there was a live in the Roots Cafe of Nago for the launch of the CD. People came, from the generation of the members to elementary school students and thier guardians. All seven tracks were performed with honest feelings by the members and were original songs. They performed enthusiastically with seven bands, including their seniors Crimson and Afromania, in front of approximately 270 people.

The studio offers attitude guidance as well as musical activities for children. Ajisai's Nakasone You-san (38) said, "The members practice as much as seven hours a day everyday. I truely love their music." and looks foward to their future. "When it's late and I'm meeting the coming people, I love the cooperation of the parents." was also said. With the 1,000 copies of the CDs sold and additional pictures, it is said that the success of the high school students is decided.

After the release of their second release indie, the single Grow!!, the band signed with the major label Sony Music Entertainment under their Epic Records sub-label.

Band's return in a major label 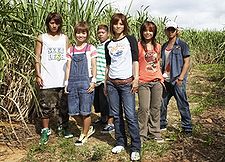 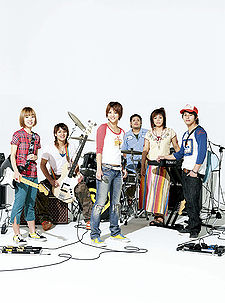 In 2006, the band made their major label debut with the single "Road". Not long after its release the band followed up with their second single: "Yura Yura" which was used as the ninth opening theme to the anime NARUTO.

The band is known for performing the ninth opening of NARUTO, Demashita! Powerpuff Girls Z's fourth ending, the fourth opening for Gintama, and currently the Tetsuwan Birdy DECODE first opening.

In 2008, the band's drummer Yuuya had to leave the band because he broke his elbow. Takuya, of the band Hysteric Blue, joined the band to replace him, but was not officially in the band. After the release of "Sora" later that year the band went on hiatus for reasons that were undisclosed. The reason behind it was thought to be due to such things as: disagreements in the group, as well as the death of Nakasone Hiraku, who was the president of Ajisai Music (あじさい音楽). He died of cancer at age 46. Haruna and other relatives cheered after the event, which would be the anniversary of his 47 years.

However in November 2009, the band issued a statement proclaiming their disbandment. The reason for this was credited to musical differences between the band members. The statement also announced that the band's vocalist Haruna was currently working towards her debut as a solo artist.

In March 2010, Chiaki began her solo career, along with Natsumi. On March 20th, Chiaki debuted at Bird Land, a concert venue in Nago, Okinawa. Then she began performing with other bands in Tokyo. She was present at the July 27 event Shibuya Eggman that occurred in July in Tokyo. On October 25th 2010, Chiaki participate in the Girl's UP! vol.71, famous event of the Shibuya Eggman for various female pop/rock acts.

In 2011, Natsumi joined a new band called Angrperchin, with similar styles, but with a more traditional sound of Okinawa. The band it is comprised of ex-ajisai band members.

On October 1, 2011, was released the film "Tengoku Kara in Yell", which is summary of the history label Ajisai Ongaku Mura. Also disclosed is the history of the band's inception, to its end after the death of Nakasone Hiraku. The song Grow!! was used as the insert song for the same movie.