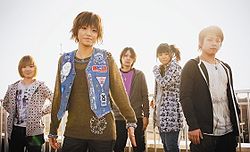 "Haru ~spring~" is the first digital single released by Hearts Grow. It was released in limited quantities. The song is a cover of Hysteric Blue's hit song of the same name which was released in 1999. In March, 2008, the track was used as the ending theme of the TV show BE-BOP! HIGH HELL.