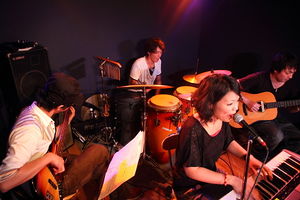 Miyagi Chiaki (宮城千秋) (formerly known as Chiaki (チアキ)) is a Japanese pop musician. She was the keyboardist, and a vocalist of the band Hearts Grow. She began her career as a singer in the pop group G-SEVEN, where her current band members Natsumi and Haruna, were also members. In March 2010, Chiaki began his solo career, along with Nakasone Natsumi as guitar support. On March 20, Chiaki debuted at Bird Land, a concert venue in Nago, Okinawa. Then she began performing with other bands in Tokyo. She was present at the July 27 event Shibuya Eggman that occurred in July in Tokyo. In October 25, 2010, Chiaki participated in the Girl's UP!!! vol.71, famous event of the "Shibuya eggman" for various Rock/Pop girlbands. Currently, she is living in Tokyo. 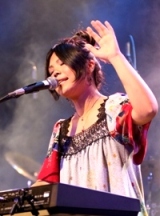