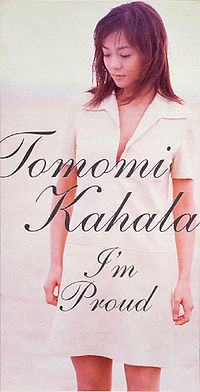 "I'm proud" is the third single released by Kahala Tomomi. The song has been described as a heartfelt ballad and was used as TBC's Tokyo Beauty Center The Lady Aesthetic commerical song. The first press edition of the single came in a special three-fold case, and when the case is opened it reviles a picture of a ferris wheel. The song won Kahala an invite to the end of the music program Kouhaku Uta Gassen.

The single reached #2 on the Oricon charts and stayed on the charts for a total of thirty-three weeks. It is Kahala's second single to sell over a million copies. Because the single sold 1,372,420 copies in 1996, it became the #8 single of the year. The single also out sold all ofAmuro Namie's (Kahala's biggest competitor at the time) singles that year (Amuro's single "Don't wanna cry" sold 1,371,730 and became the #9 single of the year). The single has since sold a total of 1,390,440 copies, making it her best selling single. This single ranks in at #96 of the best selling singles in Japan.