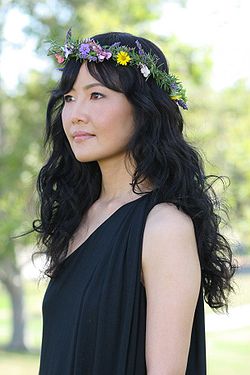 Iijima Mari (飯島真理) is Japanese pop singer-songwriter and a former idol under Victor Entertainment and Warner Music Japan. She is known for her role of Lynn Minmay in the classic space-opera anime Choujikuu Yousai Macross. She is fluent in both Japanese and English.

Iijima Mari started her career in 1982 by voicing and singing for the fictional idol Lynn Minmay (リン・ミンメイ) in the legendary classic space-opera Choujikuu Yousai Macross. The anime series was very popular at that time and it also rose Iijima's popularity as an idol. In 1984, her third single "Ai Oboete Imasu ka" was used as the theme song for Choujikuu Yousai Macross Ai Oboete Imasu ka movie. The song highlighted the film's glorious climax (which totally outdoes the TV series' version) and reached #7 on the Oricon weekly charts, selling 270,510 copies. "Ai Oboete Imasu ka" and its B-side, "Tenshi no Enogu" which was used as the ending theme / Lynn Minmay's farewell song are still popular even todays. Aside from singing, Iijima also compose most of her songs but the role of Lynn Minmay also became her curse and she was overshadowed by her character.

In 1989, Iijima married and moved to Los Angeles but later divorced in 2001. In United States, she is still singing and releasing albums. 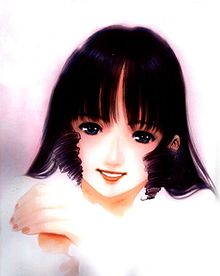