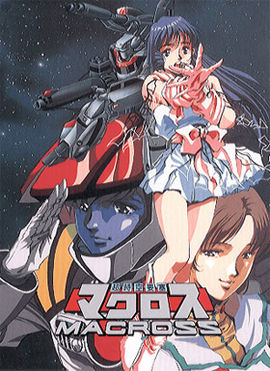 Choujikuu Yousai Macross (超時空要塞マクロス; The Super Dimension Fortress Macross) is among the many 80s "space opera" anime series produced in Japan. It was broadcast between October 3, 1982 and June 26, 1983 on the MBS, and produced by Big West, Studio Nue, and Tatsunoko Production. North Americans may have already come to know the thirty-six episode saga as the first part of Carl Macek's Robotech (1985). Driven by music from Haneda Kentaro and Iijima Mari, populated by mecha designs from the famous Kawamori Shoji, and developed by Studio Nue, Macross has become one of the most recognizable brands to this day. It was most certainly one of the leading series of the transformable-robot genre, thanks in no small part to Kawamori's Valkyrie designs.

Above and beyond the technical wizardry that Kawamori is famous for was a simple story about a galactic war between the humans and an ancient race called the Zentradi. While the origins of the story are quite humble by today's standards, its appeal still stands strong today.

In 1999, a derelict spacecraft crashes on what is now known as South Ataria Island. In 10 years, the humans rebuild the ship and dub it the Super Dimension Fortress Macross. However, before its maiden voyage, the alien race known as the Zentradi (a war-mongering race of giants) attack the Earth, looking for the remains of a Supervision Army ship (the Macross). In order to spare the world some serious damage, the captain of the Macross orders a space fold (untested at the time) and the ship ends up near Pluto's orbit. The trick, however, is that it also manages to take Macross Island with it, becoming an unwitting colony ship. The goal is to return to Earth, but the Zentradi are relentless in their pursuit.

The overall notion is shallow at best, but the main appeal of the series was the intrapersonal relationships that grew between members of the city (which was rebuilt in the belly of the Macross) and members of the military, as well as the incessant dogfighting in transformable jets. In fact, the series concentrates on the relationship of Ichijo Hikaru - a Valkyrie's pilot, Hayase Misa - a military officer, and a singer, Lynn Minmay. The basis of this relationship has become a staple in the Macross series. "What is a Macross show without a love triangle?". 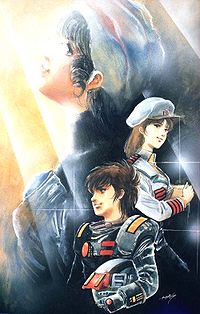 Macross was so popular that it spawned an even more popular version of the tale in the form of a motion picture in 1984: Choujikuu Yousai Macross Ai Oboete Imasu ka (超時空要塞マクロス 愛・おぼえていますか; The Super Dimension Fortress Macross: Do You Remember Love?). It retold the original story, breaking down the thirty-six episodes into a two-hour movie, as well as introduced a new version of augmentative FAST Pack weapon systems for the Valkyrie fighters.

More importantly, though, was the song "Ai Oboete Imasu ka (愛・おぼえていますか; Do You Remember Love?)" performed by Iijima Mari, the voice actress for Lynn Minmay. The song highlighted the film's glorious climax (which totally outdoes the TV series' version) and climbed to the Top Ten charts in Japan. The song is known for the first anime song to enter Oricon top 10 and is covered many by later singers in Macross universe (Mylene Jenius - Tomo Sakurai, Ranka Lee - Nakajima Megumi), anison singers and seiyuus.

Minmay was the first major role that Iijima ever played, but she has remained one of the most popular voice actresses of the 80s. After the movie, she went on to focus on a successful music career before settling down in Los Angeles.

To date, Macross has spawned several sequels and series, one of which was not produced by Studio Nue and not considered part of the Macross canon (Macross II).