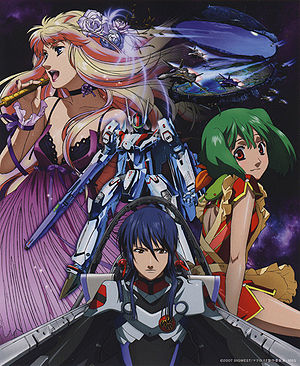 Macross Frontier or Macross F (マクロスF (フロンティア)) is a science fiction space drama anime series. It is the third TV series of the popular Macross universe and was released to celebrate the franchise's 25th anniversary. The anime is animated by Satelight studio, directed by Kawamori Shouji and music written by Kanno Yoko. It was aired every Thursday at 25:25 on MBS from April 3rd to September 25th, 2008. The anime is notable for its musical succession with all related CDs debuted on the Oricon weekly charts top 10 and made to the Oricon 2008 Top 100. In total, Macross Frontier related CDs sold around 1 million copies in Japan and its first volume is the best selling Blu-ray disc of 2008 in Japan.

In the year 2059, 47 years after the original Super Dimension Fortress Macross, on the Macross Frontier, Saotome Alto, a teenager boy meets Ranka Lee, a shy girl who want to become a singer and Sheryl Nome, the "Galactic Fairy" from Macross Galaxy who is on her galaxy live tour. While sailing in its long journey in search of a new habitable planet, the Macross Frontier was attack by extra terrest monsters called Varja, the accident involves the three of them and their wheels of fate begins to turn. The anime focuses on the war between humans and Varja to protect the Frontier and the love triangle between Alto, Sheryl and Ranka along with the mystical power carried by Ranka.