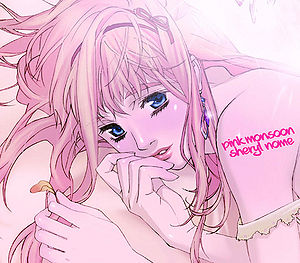 "pink monsoon" is a single recorded by May'n. It is the third Character single for Sherly Nome in Macross Frontier. The song is described as Sheryl's debut single and was used as an insert song for the film Macross Frontier ~Itsuwari no Utahime~. A sample of the song was previewed in Macross Frontier Drama CD Nyan Dra◎Dra4 which was released on July 2009.

The single reached #6 on the weekly Oricon chart and it continued to rank for a total of nine weeks, selling 38,703 copies.