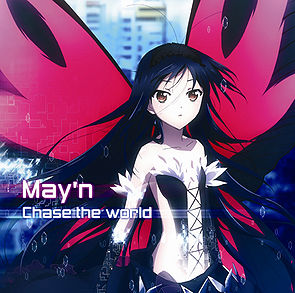 "Chase the world" is the sixth single (12th single) released by May'n. It was released in three versions: two "Real Editions", limited CD+DVD and regular CD Only, and a CD+DVD anime version released as "Avatar Edition" (published by Warner Home Video). The title track was used as the opening theme song for the anime Accel World. The single reached #7 on the weekly Oricon chart and charted for 13 weeks selling 33,556 copies. This is her highest selling single not related to the Macross Frontier series.