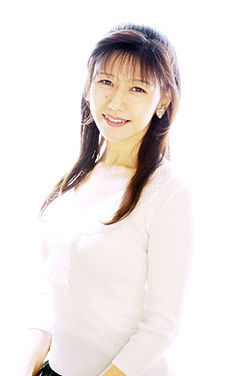 Inoue Kikuko (井上喜久子) is a Japanese pop singer, seiyuu, and cosplay model, signed to Office Anemone management. Inoue made her debut in the entertainment industry in 1988 as an anime seiyuu in the series Heart Akko Desu. She was one of the popular seiyuu which created the third boom and she is best known for several long running roles such as Tendou Kasumi in Ranma 1/2 and Belldandy from Aa Megami-sama. 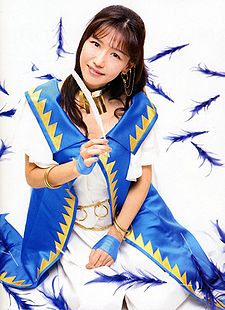 Inoue Kikuko first was working as a student teacher for a middle school, but after a few problems she decided to make a career change. After watching the re-runs for the Attack No.1 anime series she decided to try and work as a voice actor. Inoue made her seiyuu debut in 1988, playing a role in the Heart Akko Desu television anime series. It was that year where Inoue was offered a role in the upcoming Ranma 1/2 anime adaption. She took the supporting role of Tendou Kasumi, the eldest sister of the main female character. Through the series Inoue released her first musical work, the character single "Otousan".

In 1991, while still working on Ranma 1/2, Inoue joined the series other female seiyuu to join the seiyuu group DoCo. The group was made up of Inoue, Hayashibara Megumi (林原めぐみ), Hidaka Noriko (日高のり子), Takayama Minami (高山みなみ), and Sakuma Rei (佐久間レイ). The group released one single, which was followed by their debut album. The group performed together even after the anime ended. They disbanded in 1994 after the release of their final album.

It was in 1992 when Inoue started voiced her most well known character, Belldandy. She first started voicing her on audio dramas and musical releases related to Aa Megami-sama. Soon after she took the role, the series manga-ka Fujishima Kosuke started to incorporate traits from Inoue into Belldandy's character.

In May 1996, Inoue married her high school sweetheart. The two later had a daughter in February 1998, whom is referred to as Hocchan.

Inoue enjoys all aspects of her field, including cosplay. She herself likes to cosplay as characters she has voiced. She sometimes works as a cosplay model, and has contributed to several cosplay magazines.