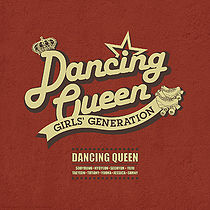 "Dancing Queen" is the seventh Korean digital single released by Girls' Generation. The song, which was released in advance of their fourth Korean album I Got A Boy, is a Korean cover of Duffy's 2008 hit "Mercy". The song and it's video were recorded back in 2008 and supposed to be their comeback song preceding "Kissing You", but due to copyright reasons, it was replaced by "Gee" as their comeback song in 2009.