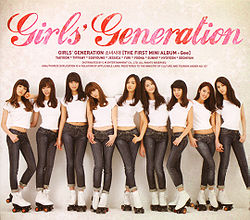 Gee is the first mini-album released by Girls' Generation. It was released after the group's nine month hiatus. The title track was used as the lead track. The song "Way to Go!" is a new full version of Girls' Generation and Dong Bang Shin Ki CF digital single, "Haptic Motion".

"Gee" became a record holder for the longest-running #1 on music portal M.net (for 8 weeks), surpassing the previous record of 6 weeks set by the Wonder Girls' "Nobody". They also broke the record on KBS music show Music Bank by being #1 for 9 consecutive weeks, previously set by Jewelry's "One More Time", which had 7 wins. They won the award for best-selling song for the first half 2009 for "Gee" song. Promotions for the song ended at the end of March.

The album proved to be successful in terms of sales, selling over 200,000 copies as of 2010 according to Gaon and Hanteo sales chart.