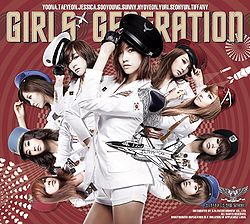 "Sowoneul Malhaebwa (Genie)" is Girls' Generation's second mini-album. Controversy erupted over the mini-album cover after netizens claimed the fighter plane was a direct replica of Japan’s A6M Zero fighter planes, which was operated by the Imperial Japanese Navy Air Service in World War 2. Bloggers also complained about the use of an eagle emblem on Girls' Generation's hats that resembled the Parteiadler of the NSDAP. Due to the controversy, SM Entertainment postponed the mini-album release date, which was to be released on June 25, 2009, to June 29, 2009. The plane on the cover was replaced with the South Korean T-50 Golden Eagle, and the Nazi emblems on the girl's uniforms were removed.

Just like its predecessor Gee, Sowoneul Malhaebwa (Genie) proved to be a big hit, as it conquered various music sites like Melon, Dosirak, MNet, Bugs and it was No.1 on the weekly charts and SKT ringtone weekly charts of the first week of July. They won the No.1 spot on both Music Bank and Inkigayo.

The mini-album sold an estimated 50,000+ copies in its first week after released (almost double the numbers from the first-week sales of Gee), an unusual feat for any Korean girl group. The albums went to sell over 200,000 as of 2010.