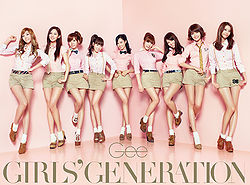 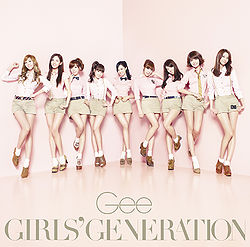 The Korean version of "Gee" was originally included on their first Korean mini-album of the same name, Gee, which was released on January 7, 2009.

On the first day of the song in Korean music sites, it reached #10 on Melon (Korean's biggest online music store), which set a record for SM Entertainment artists. Quickly after, it reached #1 on all major Korean music sites, including Melon. It was the first time that a SM song reached the #1 spot in Melon. It managed to win 9 times in KBS Music Bank "K-chart" and 3 times in SBS Inkigayo "Take Seven" chart (3 times is the limit for Inkigayo), and it was chosen as the top song for the first half of 2009 in KBS Music Bank on June 2009. "Gee" was the song that stayed the most number of weeks in KBS Music Bank's K-Chart Top 20, with a total of 22 weeks. The song was promoted in music programs from January to March 2009.

The Korean music video for Gee was the most viewed video of 2009, in the most used streaming video site in Korea, GomTV. It has been viewed 9,889,057 times (as of February 2010). There were two different music videos produced for the Korean version of the song, one that featured the girls in a colorful environment, and another that has them dressed in shorts.

"Gee" has been covered and parodied several times by different (well-known and unknown) Korean comedians, musicians and singers. The dance has been performed many times by Koreans, as can be seen in Youtube and Daum videos. The song was popular even amongst Harvard law students, and due to the students' request, Girls' Generation meet them in March 26, at SM Entertainment while they were in a research about Korean Culture. 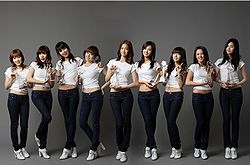 Girls' Generation with their nine trophies from Music Bank 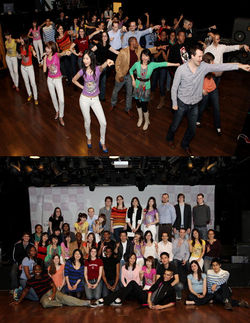 The song is composed by E-TRIBE, who also composed various hit songs, such as Lee Hyori's U-Go-Girl, but thanks to Gee's popularity, his fame as a composer skyrocketed in Korea.